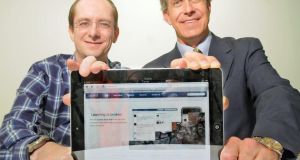 Qstream, an Irish-backed mobile sales enablement and analytics solution spin-out from Harvard has signed up eight of the world’s top ten pharmaceutical companies as its clients.

Qstream which was founded in 2008 in Boston by Duncan Lennox, a UCD computer science graduate from Bray, and Dr B Price Kerfoot, an Associate Professor of Surgery in Harvard Medical School, said it now had 100,000 people using its products after sales exploded in the last year.

“In 2014 we have grown revenues four times,” Mr Lennox said. “Our sales are now in multimillion dollars.” He said Qstream was targeting companies with up to 1,000 sales people in the field who need to help them learn and remember using game techniques on their mobile phones.

The company was built upon seven years research by Dr Kerfoot who is an expert in how to get people to remember things longer and change ingrained behaviour. “People can forget things they are taught quite quickly. We have the test data that shows we can really change that,” Dr Kerfoot added.

Dr Kerfoot was honored by President Barack Obama with the Presidential Early Career Award in 2011 and has written numerous academic papers.

Mr Lennox said Qstream now employed 40 people and it had recently opened an office in Ranelagh, Dublin 6 where it employs 14 people adding to its engineering base in Oregon and headquarters in Boston.

“We are incredibly capital efficient but we are growing faster than we forecast. We will probably seek to raise money next year,” Mr Lennox said. He said the company had not decided how much it needed to raise but he expected it would be around $3 million.

Mr Lennox said now used by about quarter of the world’s top 50 pharmaceutical companies but he saw opportunities for it to expand into other sectors.

“We would like to expand into financial services and the technology sector,” he said. “We can see our products being used by large tech firms with big sales forces in the field like IBM or Oracle. ”

“In financial services we think insurance companies, brokers, and wealth managers make sense to target and scale up to.” Qstream was in Dublin to attend the Kauffman Fellows European Venture Capital Summit as well as the Dublin Web Summit.

1 Should my mam wait for house prices to drop before buying?
2 Citigroup warns that markets are out of step with reality
3 Chris Johns: Past is another country when it comes to our post-pandemic future
4 US ‘hard seltzer’ drink White Claw launches in Ireland
5 ‘The recovery needs to be a full-scale economic renewal’
Real news has value SUBSCRIBE