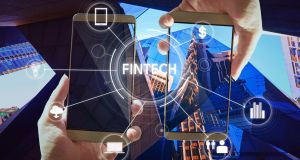 As many as 7,000 people are working in the Irish fintech sector with almost all start-ups in the space taking on up to 50 additional employees over the next 12 months, a new report shows.

Such companies are also found to be inclusive with 60 per cent of fintechs having one or more females represented at senior level.

Furthermore, many of these fintechs are actively eying expansion into other markets with 27 per cent looking to move into the UK and mainland Europe, and 26 per cent identifying AsiaPac as a region of interest.

According to the study, the first of its kind to be carried out here, the main areas of focus for Irish fintechs are regulation technology (regtech) and digital identity, payment and remittances, asset management solutions and financial software.

The report indicates that nearly one in five fintech companies are looking to raise €5 million or more in their next funding round, while 22 per cent expect to secure at least €1 million in investment.

Just under a third of fintechs are regulated by the Central Bank or by a regulator of another European country. Other fintechs surveyed are not required to be regulated due to the nature of their business.

The key challenges faced by the fintech companies surveyed as part of the census are attracting qualified staff, building partnerships with established players, international expansion, and increased customer adoption.

The sector is found to have a strong multinational workforce with 51 per cent of start-ups having employees from the UK, 63 per cent from mainland Europe, 38 per cent from Asia and 37 per cent from North America.

Overall, 94 per cent of fintechs said they were intending to hire up to 50 employees in the next 12 months with coding and software development, sales, product management, and regulatory and risk management among the hardest roles to fill.

“Demand for fintech services and the opportunity for innovative Irish fintechs at home and abroad has never been so strong. PSD2 and open banking are key drivers, with the framework for sharing data between banks and fintechs taking shape. This together with strong global demand for payments and regtech solutions is good news for Irish fintech,” said Colin Ryan, EY’s financial services advisory practice lead.