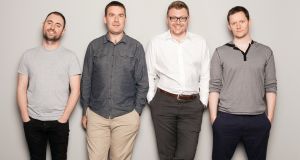 Intercom, the Irish-founded technology company that claims more than one billion end users, reported a sharp rise in revenues at its Dublin unit last year as its paying customer base jumped by 44 per cent.

However, the Dublin and San Francisco-headquartered company, which achieved unicorn status earlier this year after raising $125 million (€109 million) to take its valuation to over $1 billion (€880 million), was unable to reduce losses, which were unchanged at $22.4 million (€19.6 million).

It is understood the full-year losses are largely due to aggressive spending by the company on research and development activities.

Intercom has more than 30,000 paying customers for its services including Sotheby’s, Spotify, New Relic and Shopify.

Established by Des Traynor, Eoghan McCabe, Ciarán Lee and David Barrett in 2011, Intercom has developed a software platform which brings messaging products for sales, marketing and customer support together. Its products allow companies to communicate with customers easily through their own websites, inside their respective web and mobile apps, and by email.

Overall, the company which also has R&D centres in San Francisco and London, employs about 600 people.

“The group continues to see strong growth for the current fiscal year and expects to see a further increase in its turnover in 2019,” the directors said in a statement included with the latest accounts.