Irish company wants to use drones to deliver takeaway meals 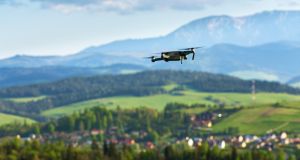 Manna chief executive Bobby Healy says the start-up’s goal is to build a worldwide drone delivery system that can deliver at “massive volume”.

Manna, an Irish start-up which is looking to deploy autonomous drones to deliver takeaways, has raised up to €10 million in an oversubscribed round.

The company, which was founded and is led by former Cartrawler chief technology officer Bobby Healy, is shortly to seek regulatory approval from the Irish Aviation Authority to allow it to begin rolling out its own aviation grade drones in the Republic.

The exact amount raised in the funding round has not been disclosed but Elkstone Capital and Frontline Ventures are among the five venture capital firms that participated.

Speaking to The Irish Times, Mr Healy said the company had settled on a relatively small seed round for now with a view to seeking a “massive” one in six to 12 months time as it looks to quickly expand into multiple markets in Europe.

Mr Healy, who prior to joining CarTrawler in 2006, founded Eland Technologies, admitted the company was embarked on a high-risk mission.

“Our goal is to build a worldwide drone delivery system that can deliver at massive volume,” he said.

“We’ve started with food delivery simply because there is no other sector that will get us to that quickly but the ultimate plan is to be able to deliver pretty much anything and everything,” Mr Healy added.

Manna is hoping to receive approval in the coming months with the aim of being up and running by the end of 2019.

The company’s drones fly at a height of about 100 metres, operate at a low noise level and can make deliveries within a two to three kilometre radius. When they reach their destination, the deliveries are lowered down with a biodegradable linen thread.

Manna isn’t the only company with a plan to use drones for deliveries. Alphabet’s Wing subsidiary was last month granted approval to take to the skies of Canberra in Australia, while Zipline operates a commercial service delivering blood supplies in Africa. Amazon is also trialling the technology.

“We’re had positive dealings with the aviation regulator to date and would expect to get the go-ahead once we formally apply for permission from them later this year,” he said.

“We’ve spent two years developing our own purpose-built drones and are now on the third generation of them. We have produced drones that are of aviation standard, which you need to have if you’re going to be flying over people’s houses. No-one else is at where we are in the sectors we want to operate in so we can build a leadership position if we move quickly,” added Mr Healy.

The entrepreneur admitted that with many obstacles in front of the company, investors have been somewhat wary of backing Manna. The fact that conversations with some investors happened during the period when Gatwick airport was forced to close due to drones seen near the runways, didn’t help the businessman.

“Part of the reason for doing a relatively small seed round was that there are a lot of questions, including will we get regulatory approval and the approval of the communities in which we intend to operate, which is also important,” he said.

“When I started out on the funding round I had 160 VCs in my funnel but about half of those immediately turned me down despite me having a good track record. I ended up with about 10 VC that were very interested in us but even then it was hard to find one that would lead. Of course, once we did everyone else flooded in with offers,” said Mr Healy.

The businessman said the plan is to scale as quickly as possible with a view to being in a number of markets as early as the company can.

“We could end up the market leaders in the space and I think that we will. But this is something where we could as easily be gone in 18 months or within five years could be dominant in multiple markets and either looking at floating to acquire our way globally or, being acquired ourselves,” he said.

“It does seem like a mad idea but the thing is that drone deliveries are absolutely going to happen across the globe and it will lead to huge behavioural change,” he said.