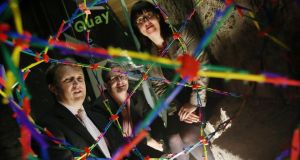 Highlighting opportunities for Irish cleantech companies at an event connecting entrepreneurs and venture capitalists in Dublin recently were (from left) Wayne Byrne of Oxymem, Richard Youngman of CleanTech Group and Aideen O’Hora of The Green Way

As attention turns to energy efficiency and cleaner, renewable sources of energy, Ireland’s budding green energy sector could be poised for a surge in activity.

For Irish consumers, water metering is about to make its appearance in the domestic market, smart metering is on the cards for energy customers in the coming five years, and the high cost of fossil fuels is forcing fuel prices higher.

It was against this background that more than 100 clean technology innovators attended an investment conference held in Dublin last week to hear about the opportunities open to firms willing to operate in the sector.

Cleantech conference
The Cleantech Investment Conference, which was organised by The Green Way and Cleantech Group and sponsored by the Sustainable Energy Authority of Ireland, was intended to highlight the potential for both companies and Ireland as a whole, bringing together everyone from start-ups and SMEs to tech investors.

Cleantech covers everything from sustainable development and eco-innovation to resource efficiency. It’s a business that could be worth around $5 trillion worldwide, the Green Way’s executive director Aideen O’Hora said.

And the good news for Ireland is that we have the potential to become a leader in the green and clean tech industry, according to The Green Way.

“The Irish cleantech sector has shown strong potential in recent years and we see good opportunities for investment in early stage firms which are really innovating in terms of their proposed solutions to societal challenges,” Ms O’Hora said.

As smart metering and water charges become a reality for consumers, it also provides an opportunity to stimulate and grow the Irish cleantech sector locally, allowing the companies to bring those skills to other markets and grow their businesses globally.

Cleantech’s managing director of Europe and Asia Richard Youngman said the company had a keen interest in the Irish sector.

Ireland has already begun building an industry here, with innovative moves in areas such as solar technology, wind power and tidal energy.

In recent weeks, it was announced that Dublin-based developer of solar equipment Nines Photovoltaics had won substantial investment to help bring its technology to market. It’s a technology that allows solar panels to be produced at a lower cost, and also increases the efficiency of the panels themselves.

The company plans to use the funding to validate its first silicon wafer-processing tool in a production environment, in collaboration with solar energy research institute Fraunhofer ISE in Freiburg, Germany.

Another project The Green Way is looking at is the development of Dublin as a living lab, where cleantech solutions will be tested, trialled and deployed.

It is helping 10 companies test-bed technologies and services such as smart transport, energy efficiency and waste management, and has already successfully implemented a test bed for Glen Dimplex trialling Quantum technology, which yields about 15 per cent in energy savings to the homeowner.

Meanwhile, companies such as OpenHydro and Nualight are making strides in the tidal power and energy efficient lighting.

Innovation key
It is this innovation that is making investors take note of the Irish sector. Among the investors attending last week’s conference was GreenCoat, ESB’s advisor to its clean tech fund, which is worth about €200 million.

The clean and green tech sector in Ireland is “nascent”, GreenCoat partner John McKiernan said. “As an investment category, it didn’t exist,” he said. “That’s changing.”

In the past decade, the global renewable energy sector has seen growth of five times, to $269 billion. That comes despite the global economic slowdown.

“Wind is taking off, solar has arrived, smart grid is coming. It’s clear that there will be changes in the way electricity is generated, transported and consumed,” he said.

It’s a good sector to be in, it seems.

“Cleantech is a bit like the software industry; it touches most of the other sectors,” Mr McKiernan said.

Although Ireland may not be seen as a major market for renewable energy because of its small population size, it still needs to access the technology to meet its EU targets of 40 per cent of energy from renewable sources by 2020, in addition to meeting targets in the transport and heating sectors.

In addition to the benefits for Ireland’s energy obligations, it is likely that adopting cleantech solutions could grow for firms into much larger export opportunities.

“We’re not a big enough market to lead all the subsectors in clean tech, but there are some companies that are taking the lead in specific sectors,” Mr McKiernan said, noting Ireland’s expertise in smart grid technologies, among other areas. “If we can crack smart grid, we will have intellectual property we can export across Europe and the planet.”