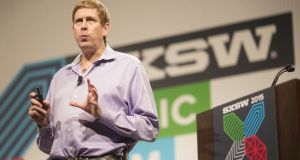 Director of SXSW Interactive Hugh Forrest: “The tight connection with the community is one of the things that helps keep the event relevant, fresh and cutting-edge”

South by Southwest (SXSW) did not put Austin, Texas on the map, but in a city that has attracted every beatnik, bohemian, artist and musician in the southwest of the US, it is not surprising that a festival which began as a fairly minor “alt” music showcase in 1987 has grown so dramatically and moved into every other discipline imaginable.

Even world leaders want to be seen there, making its alt status a thing of the past. SXSW’s induction in to the mainstream was helped by the introduction in 1994 of its Film and Interactive branches. While the latter is described as an “incubator of cutting-edge technologies and digital creativity”, the scope of a label such as “Interactive” gives the event’s creative directors licence to go in any direction.

Technology is still at the core, but each year secondary themes expand further into areas such as politics, entrepreneurship, sexuality, society and sport.

“About 75 per cent of the programming for SXSW comes via community-suggested ideas that are entered through the SXSW PanelPicker interface,” says Hugh Forrest, director of SXSW Interactive. “I think this tight connection with the community – the people who are doing the most innovative work – is one of the things that helps keep the event relevant, fresh and cutting-edge.”

Celebrating 30 years in existence (23 years for Film and Interactive), this year revellers can expect even more sessions, screenings and showcases.

There will also be several Irish start-ups selling their wares during Interactive. Dublin start-up commissioner Niamh Bushnell and her team make their Austin debut with a number of unique entrepreneurial-inspired events to promote the capital, including an Irish Start-up Wake for dead start-ups.

Last year, the Government made its presence felt by going straight to the top. Taoiseach Enda Kenny flew in for a Texan-style St Patrick’s Day, which falls right in the middle of SXSW.

The recent establishment of Ireland House Austin (combining local offices for the IDA, Enterprise Ireland and a new Irish consulate) was the primary motivating factor for the visit, making Mr Kenny the most senior political figure to have ever attended the festival in the process. This year, however, no government representative will be in attendance.

“Besides the challenges created by the general election, last year’s visit by An Taoiseach was special and we couldn’t expect him to come back every year,” says Consul General of Ireland in Austin Adrian Farrell.

With the consulate open only a year, Farrell says two other government ministers have also already visited Texas in the last 12 months: Paul Kehoe and Jimmy Deenihan. “Two ministers and An Taoiseach: not a bad spread for the first year,” he says.

This year, Ireland will have a different opportunity to leave a unique mark on SXSW. Irish street performance company Macnas will perform its distinctive street theatre spectacle in the city on Saturday, another first for the festival.

It’s difficult not to draw comparisons between the fortunes of SXSW and the Dublin Web Summit, now set for Lisbon, though it has never been in doubt that the city of Austin is central to the festival’s continued success.