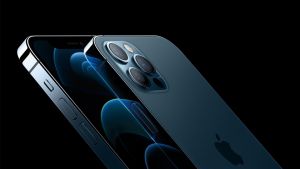 A couple of weeks later than normal, we finally have Apple’s newest smartphone. The good news is, it was worth the wait.

It seems obvious to say that the iPhone 12 Pro is Apple’s best smartphone yet. It should be; it has a new chip and some hardware upgrades that mean it is already starting out ahead of last year’s 11 Pro. It has 5G, too, which puts it ready and waiting to take advantage of the new technology as 5G networks roll out around Ireland.

But the iPhone 12 Pro is a noticeable jump in quality, from the screen and the cameras to the performance. Everything gels together well to give you a practically perfect smartphone – and 5G isn’t even the most important addition.

The thing that immediately grabs you is the design. Depending on your point of view, the iPhone 12 Pro looks either like an iPhone version of the iPad Pro, or has been heavily inspired by the iPhone 5.

Neither are wrong. The iPhone 12 Pro has a flat stainless steel band around the edges, and is all screen; on the back it has the square camera array. In short, it looks like a cross between the iPhone 5 and last year’s 11 Pro. And it wears it well. It’s almost a shame to put it into a case, especially if you have the blue version that Apple has added to this year’s line-up. It’s a beautifully designed phone.

Maybe people won’t be quite as quick to shove it into a case, though. Apple has brought in new technology this year to make the iPhone more drop-resistant – four times more, the company says. Ceramic Shield is a new technology that makes the phone tougher, which as someone who has had her fair share of trips to the repair shop for shattered screens, is welcome.

Did it survive the drop test? I’ll let you know when it happens. As much as I want to test Apple’s claims, I’m not too keen on deliberately dropping €1,160 worth of smartphone.

Speaking of displays, the iPhone 12 Pro has squeezed a 6.1in display, a custom OLED panel that makes almost everything look great, into the case, trimming down the bezels (the notch, however, remains). There is a noticeable difference between the 11 Pro and the 12 Pro side by side; the 11 Pro looks a little dull by comparison.

That will make a difference when you start shooting with the camera. It’s not just the display here, though; upgrades to the camera mean it works better in low light, plus the video looks better and the wide angle camera looks stunning.

The iPhone 12 Pro has three 12 megapixels cameras: ultra wide, wide, and telephoto. The main wide-angle camera on the iPhone now comes with an f1.6 aperture and a larger sensor, allowing for more light in your photos.

That difference is obvious when looking at photos side by side from previous iPhone models, with the new iPhone shots looking better and more detailed.

Apple has added night mode to all cameras in the iPhone 12 Pro, so you can take selfies in low light and get much better results. Instead of a badly lit smudged shot in almost-darkness, you get a bit more detail and actual discernible features. It’s a welcome addition and one that will probably be appreciated, particularly when we can get back to actually socialising with people again.

But even the regular camera does better in night mode. Shots look brighter than before, and there is no loss of detail.

The addition of the Lidar sensor to the 13 Pro’s camera is something the majority of users probably won’t notice. The technology is particularly useful for augmented reality, but it also has its uses in photography. The Lidar scanner in the iPhone 12 can help with focusing in low-light situations, for example, where previously the camera may have struggled.

Video is also noticeably better. The iPhone 12 Pro supports 10-bit HDR, so you get better colours and depth, and supports Dolby Vision. To get the most out of this, you’ll need to view the footage on a compatible screen, but it is worth the effort. Lidar helps here, too, with focus in night videos particularly good. It is also noticeably brighter than the iPhone 11 Pro.

If there is one thing to criticise, its the limited optical zoom. At 2x, it’s less than rivals such as the Samsung Note 20 Ultra, which has 5x zoom.

As previously mentioned, a new iPhone means a new chip: the A14 Bionic. That means another jump in speed for users, which is always welcome as apps become more powerful. There is no slowdown (yet) as you swap between multiple apps.

One of the most useful features in the new iPhones is MagSafe charging. Apple’s idea was to put a ring of magnets inside the iPhone case that will snap the phone to the MagSafe charger. There’s no risk of bumping the phone off the charger and leaving you without power at a crucial moment.

It may not seem like much of a problem but on more than one occasion I’ve left a device charging only to find an hour or so later that it wasn’t quite on the charger’s sweet spot.

But back to the case again. If you put a case on the phone, obviously, that will impact the MagSafe charger’s effect. It will still charge – it worked on an 11 Pro through a fairly robust case – but the magnets won’t hold the phone in place well. That’s solved by using a MagSafe compatible case – which means more money.

The good
The iPhone 12 Pro is a noticeable step up from its predecessor, with a bigger and better display, an improved camera and useful additions such as the MagSafe charger. It’s fast, too, with the A14 Bionic chip earning its place.

The not-so-good
Apple has ditched the charger plug and the headphones from the box. I won’t mourn the headphones but, with the included cable being a USB C to lightning cable, it made it more difficult to find a compatible charger at home.

That will be relevant because if you are using 5G on the iPhone 12 Pro (limited in Ireland at the moment) you’ll find the battery life is poorer than on 4G.

The rest
The new iPhone also has 5G. That won’t mean an awful lot right now, with the roll-out of the next generation networks still in progress, but it future-proofs the phone for six months to a year from now.

Verdict
Apple’s best smartphone yet, which challenges the best Android devices out there.