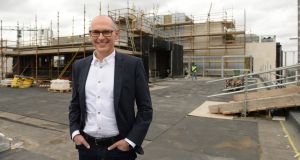 Online recruiter Indeed, which employs more than 900 people locally, recorded a 66 per cent increase in revenues at its Irish arm last year as turnover jumped by €137.7 million to €345.7 million.

The surge in turnover comes after the fast-growing company announced a 48 per cent rise in revenues a year earlier.

Accounts recently filed for Indeed Ireland Operations Limited reveal losses at the company narrowed slightly to €70.6 million in 2017 from €80.2 million in 2016.

The company attributed the loss to the “significant spend” on advertising and marketing it has committed to locally as it expands its international operations.

The Irish subsidiary, which encompasses all the group’s activities outside the United States and Asia Pacific, closed last year with a deficiency of assets of €242.3 million, as against €171.7 million in 2016.

Indeed, which opened its first office in Ireland in March 2012, has grown headcount fast in recent years. The company had 757 employees at the end of 2017, up 41 per cent versus the prior year. Staff numbers have continued to rise, surpassing 900 at the end of last month and as the company forecasts it will have more than 1,000 staff in the Republic shortly.

Staff-related costs, including wages and salaries, jumped from €36.6 million to €59 million.

Indeed, whose parent Recruit Holdings earlier this year acquired rival Glassdoor in a $1.2 billion deal, is set to move to new premises close to Grand Canal Basin early next year. The offices have capacity to hold about 2,000 employees.

Co-founded by Paul Forster and Rony Kahan in 2004, Indeed has more than 200 million unique visitors every months with 9.8 jobs added per second globally.