IBM, Intel and Ryanair at conference to unite designers and developers

Tickets also selling fast for Uprise, which comes to Dublin for the first time this month 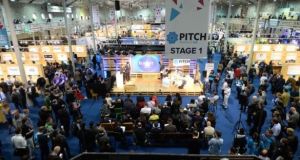 The divide between designers and developers will be addressed at a major new tech conference to be held in Dublin early next month.

Senior speakers from Intel, IBM and Ryanair will all be speaking at UXDX, which takes place in the RDS on November 2nd.

Among the speakers at this year’s event are Douglas Powell, design principal at IBM; David Boundy, director of IoT (Internet of Things) at Intel; and Ryanair’s head of development, David O’Callaghan, who leads a team that has responsibility for transforming the airline into a “digital company that flies planes”.

“UXDX is for all parties involved in product development: it’s about designers, developers, product owners and project managers at all stages of their careers coming together to share their perspectives, learn from each other and find the best way forward,” said event director Catherine Madden.

Sponsors of this year’s event include the Department of Jobs, Enterprise and Innovation, Fáilte Ireland, Meet in Ireland, Frontend.com, Optimal Workshop, FR Kelly, Dublin UX and the Digital Hub.

Separately, tickets are selling fast for the Uprise Festival, which takes place at the RDS on October 20th.

The event is the brainchild of Amsterdam-based Irishman Paul O’Connell, who founded the festival in Holland last year but is now expanding it to Ireland.

Promising “no public wifi for the 2, 000 attendees, no big guest speakers and no apps to lose yourself in,” the start-up focused festival promises to showcase some 150 innovative young companies, and provide practical workshops and panels from Microsoft, Google, Facebook, Salesforce, Freelance.com and Seedrs to mention just a few.

“We will be ending Uprise with our Epic Pitch battle which will see six handpicked international start-ups taking on six Irish-based ones in an event in which the audience chooses the winner,” said Mr O’Connell.

Can I see copies of earlier wills my mother wrote? 05:59
High-rise housing debate between Ronan and McDonald falls flat 05:41
Stocktake: Ordinary investors in full bull mode 05:40
Dublin’s post-Covid recovery should be a matter for national debate 05:30
Stocktake: Timing the rotation into value stocks 05:30