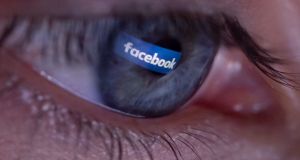 Facebook moderators were instructed not to remove extreme, abusive or graphic content from the platform even when it violated the company’s guidelines, an undercover investigation by Channel 4’s Dispatches team reported last night. Photograph: Getty Images

A report by the Central Bank, commissioned by the Government in the wake of the tracker-mortgage scandal, calls for Ireland to make top bankers accountable for failings under their watch. This would make it easier to fine and sanction senior individuals. The recommendation is contained in a report that is set to be highly critical of banks for often failing to put customers first.

Facebook moderators were instructed not to remove extreme, abusive or graphic content from the platform even when it violated the company’s guidelines, an undercover investigation by Channel 4’s Dispatches team reported last night. Violent videos involving assaults on children, racially charged hate speech and images of self-harm among underage users all remained on Facebook after being reported by users and reviewed by moderators.

Karlin Lillington argues the disturbing findings of the programme show that concerns over how the social media giant moderates hateful content are not being addressed. She asks whether the free-form structure of these platforms now be reconsidered?

Property agents Savills is predicting a sharp slowdown in house price growth in Dublin in the coming months as the supply of new homes ramps up. The firm said the first indication of this “cooling off” should be revealed in the official house price figures for May, which will be published on Friday.

CityJet has agreed a deal with a Spanish regional carrier to bolster its leasing business and attract new contracts in the regional air-travel market in a move it says is a “prelude to a merger”.

In his column, Cliff Taylor explains how the Government is facing a tricky choice between two possible runners for top jobs in the ECB banking system in the next year or so, with the likelihood that – at most – only one can be successful.

In her London Briefing, Fiona Walsh reports on how a decision to host the UK’s treasury committee on an awayday at Farnborough airshow may have seemed like a good idea at the time. Alas, the technology failed to match the high-tech surroundings.

In commercial property Jack Fagan reports how a South Korean institutional investor is closing in on a deal to buy the second of five office buildings being developed in the Dublin docklands by Sean Mulryan’s Irish property company, Ballymore, and its Singapore partner Oxley.