High stakes: Apple Watch a gamble on the next big niche

Is Apple the company to convince consumers to invest in the smartwatch en masse? 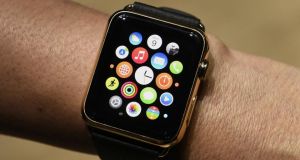 It has been almost six months since we first saw the Apple Watch. Six months during which rivals, already trying to convince consumers that smartwatches are the next big thing, could push harder to get a headstart.

Six months when the argument over whether the Apple Watch will be a success or flop have raged, despite only the barest details of the product being available.

Could Apple be the company to convince consumers to invest in the smartwatch en masse?

The stakes are high for Apple. The company has been working on the watch for some time, filing patents and building up staff to work on the project.

It’s also a milestone for chief executive Tim Cook, with the Apple Watch his first major new product launch since taking the helm.

Success here would also silence critics of the company. Apple has for some time been fending off speculation that its drive to innovate has been eroded - a view its supporters and executives are keen to refute.

But the concept of the smartwatch has found it hard to break out of the “niche product” box with consumers. Chief complaints are the look of the watch, with battery life also an issue.

That’s one area where Apple didn’t push; the Apple Watch has a battery life of about 18 hours, which will be a disappointment to those who are looking for a device they won’t need to charge every day.

“Enthusiasm for smartwatches has been relatively low, suggesting the wearable tech sector needs a ‘magic’ product to spark adoption,” said Cathy Boyle, senior mobile analyst at eMarketer. “Apple Watch is best positioned to be that product, given the device’s close association with the iPhone and the size of the iPhone user base - one in four US consumers regularly uses an iPhone.”

Smartwatch shipments reached 4.6 million in 2014, according to Strategy Analytics.

That figure is expected to grow significantly this year, as the number of devices on the market increases. The research firm is predicting shipments of the new Apple device will reach 15 million in 2015, with overall shipments at more than 28 million.

“But smartphones already offer a convenient way to check the time, access the web and apps, and increasingly pay for products,” Boyle said.

“So, to succeed with a smartwatch, Apple needs to create a compelling case for the device, a feature set that offers far more than simply saving consumers the few seconds it takes to pull a smartphone out of a pocket or purse.”

Apple Watch will also have to play in an already crowded market. Samsung has said it will “pause” the release of new smartwatches; since the company unveiled the first Samsung Gear in 2013, it has added no fewer than five models.

Now, it says, it will take stock of the products it has already developed and concentrate on perfecting the smartwatch.

Then there is Google to contend with. The company unveiled its Android Wear platform for wearable technology almost a year ago, and the first watches to use the software went on sale shortly afterwards. The next round of smartwatches, ones that resemble more traditional watches, are already starting to appear.

The Swiss watch makers are getting in on the act too. Swatch is working on a watch with an activity tracker built in.

But Apple taking its time in getting to market hasn’t always been a bad thing in the past.

When it first released the iPhone, smartphones weren’t new, nor was the concept of a touchscreen device. But Apple turned the market on its head, and one-time smartphone king Nokia is paying the price.

It was a similar situation with the iPod - not the first digital music player on the market, but it became the one to beat.

“When Apple brings its design nous to hardware and software it tends not only to upend and redefine that space, but it also breathes life into a whole vertical,” said Ian Dodson, founder of Digital Marketing Institute.

“It takes technologies that languish in the hands of engineers and designs them to make them usable, beautiful and highly desirable.”

Not everything Apple touches turns to gold, however.

The company’s brief foray into a social network, music-oriented Ping, was unveiled in 2010 and stuttered along for two years before being shut down.

And Apple’s first foray into the phone market is rarely mentioned; the Rokr, a collaboration with Motorola, had a capacity of only 100 songs when it launched in 2005.

That may be a little too rich for some users, who will look on it less as a timepiece to hand down and more like their smartphone - something that will be upgraded.

However, if Apple’s Watch is a success it may have a positive effect for the sector as a whole. It’s compatible only with the iPhone, so Android users are out in the cold, and they make up a significant portion of the smartphone market.

April will be a test of the market for everyone.