Move to impose annual levy, if taken up by other EU states, could leave Ireland isolated 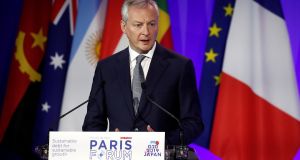 French finance minister Bruno Le Maire delivers a speech during a high-level forum on debt at the Finance ministry in Paris in May 2019. Photograph: Benoit Tessier/Reuters

The Government continues to favour a global approach to a digital sales tax, in spite of France’s decision to push ahead unilaterally with a tax on Facebook, Google and other US tech firms.

The French plan, approved by the senate in Paris last week, amounts to a 3 per cent annual levy on French revenues of digital companies with yearly global sales of more than €750 million. It primarily targets those that use consumer data to sell online advertising and comes amid an outcry over multinational tax avoidance.

If a groundswell of EU states follow suit, and several have already pledged to do so, Ireland, which hosts the European headquarters of these companies, could be isolated.

A spokesman for the Government said: “Ireland believes that the challenges arising from the digitalisation of the economy are best addressed by finding a sustainable globally agreed solution at the Organisation for Economic Cooperation and Development (OECD) level.”

Experts here have warned that an EU-wide digital tax could dampen the flow of foreign direct investment from the US into Europe, while stemming Ireland’s corporate tax take as companies cut the profits they declare for tax in the Republic.

Despite threats from the US to retaliate with sanctions, France has said its digital tax proposals were in keeping with international rules.

Separately, France is expected to use a G7 finance ministers’ meeting it is hosting this week for a new push on minimum corporate taxation.

France has put fiscal justice at the heart of its year-long presidency of the Group of Seven industrialised nations. The July 17th-18th summit takes place in Chantilly, north of Paris. France and Germany made a proposal this year for minimum corporate taxation as part of a major overhaul of decades-old cross-border tax rules under way in the OECD. Their efforts have been boosted by the Trump administration’s 2017 tax reform, which in effect introduced a minimum level of tax in the US.

French finance minister Bruno Le Maire argues that current rules allow big internet countries to get away without paying their fair share of tax as they can book profits in low-tax jurisdictions like Ireland regardless of where the income originates from.

France hopes that solid backing from G7 countries for minimum taxes will boost the efforts of the OECD, which is seeking agreement among nearly 130 countries by the end of 2020. “One of the first priorities of this G7 finance ministers meeting is to revamp taxation for the 21st century such that it is adapted to the economic realities of the 21 century,” the finance ministry source said.