EY Entrepreneur of the Year finalist Shane Evans of Scrapinghub 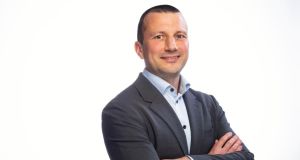 While building a website that would showcase products from other companies, Shane Evans got frustrated. He found it almost impossible to get up-to-date product data at the scale he needed. To solve the problem, he built a solution that has ultimately evolved into his business, Scrapinghub. The company, which enables customers extract data from the web, was established in 2010 with Evans as a co-founder. In 2017, he took over as chief executive.

Under Evans’s leadership, the company has hit aggressive revenue targets and now employs more than 180 staff across 20 countries.

Evans himself has experience of this sort of thing already, having been involved with start-ups since joining Lastminute. com in 1999, where he led the engineering team. But Scrapinghub is now the focus of his talents, with growth of 50 per cent anticipated again this year.

While it hasn’t always been easy, Scrapinghub is now a business with more than 2,000 customers and a million developers who rely on its tools and services. And, to Evans’s delight, the company has been completely bootstrapped from the outset.

He has loftier ambitions for the company still, however. Evans wants Scrapinghub to provide open access to the world’s web data to help businesses get the data they need. If he can pull it off, it would be quite the coup.

My greatest achievement has been growing Scrapinghub year over year from a team of two with zero revenue in 2010 to over $12 million in revenue and 180 fully remote staff in 2019, all whilst being 100 per cent bootstrapped. Today, Scrapinghub is one of the largest fully remote companies, growing by over 50 per cent per year.

We hit some financial difficulties in 2016. Costs were increasing faster than revenue and we were weeks away from running out of cash. Worryingly, we didn’t see this coming and didn’t know how to get out of it.

I analysed our financial data to determine the cause and the magnitude of the problem and then took action. We scaled back operations in one area and let go about 10 per cent of our staff. We had to renegotiate some contracts and I personally guaranteed a business loan that got us through the most difficult period.

I strategically focused our efforts on the areas of the business that would provide the highest return in the short term. We put more process and controls in place to avoid this happening again and I set about recruiting a strong leadership team and stepped into the chief executive role. The following year was the most profitable in the history of the company and growth has been accelerating every year since.

The best advice I received was to set ambitious goals. Having peers that have themselves had big successes has helped me immensely. They have continually pushed me to set the bar high and ignore advice to “be realistic” – the worst piece of advice I have been given – which has really accelerated our growth as a company.

Scrapinghub is a truly global company. As we are a 100 per cent remote company, we have over 180 staff in 28 countries and customers in over 100 countries. Over the next year, we plan to accelerate our global reach with a particular focus on the US. A cornerstone of this expansion will be opening a US sales office early next year.

As a fully remote company, we rely on our employees to have access to strong, consistent broadband. This is one area I feel the Government could focus on. More and more companies who want to hire the best talent will see the benefits of remote employees and we will need the infrastructure in place to support this. It also helps with regional rural development.