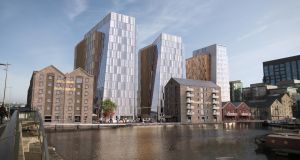 The Boland’s Quay site on Dublin’s Barrow Street has been sold to tech giant Google at a total cost of about €300 million, it is understood.

The development is one of the largest urban regeneration projects to have been undertaken within Dublin city centre in recent years. The figure of €300 million includes the purchase price, plus construction and fit out costs.

Since the development project at the site received planning permission in July 2015, Nama has provided funding for demolition and enabling works. In December 2016, it committed to providing funding for the construction of the entire scheme in one phase.

Dutch-owned BAM is the main contractor and the scheme is set for completion on a phased basis from the second quarter of 2019.

Google will retain the office accommodation for its own use and will appoint a commercial letting agent to manage the letting of the remaining commercial premises and apartments.

Boland’s Quay will be linked to Google’s Europe, Middle East, and Africa (EMEA) headquarters on Barrow Street via walking routes through the site.

The development will also include a new pedestrian bridge and two new civic plazas with water frontage to Grand Canal Dock.

The historic buildings on the site, dating from the 1830s, will be “sympathetically restored” and their heritage preserved adding to the “architectural uniqueness of the development”, the Nama-appointed receiver Mark Reynolds of Savills said.

Securing the sale of the entire campus to one owner occupier “significantly de-risked the project and has justified the decision to build out the entire scheme,” he said.

“The sale allows the team to focus on delivering this magnificent new development, in a smooth and timely fashion, in conjunction with the new owner Google. The vision set out for Boland’s Quay is now becoming a reality and the sale reinforces the quality of the planning permission secured and design credentials of the project.”

Nama chief executive Brendan McDonagh said the agency was “pleased” with the progress which has been made in developing the site, which will bring “much-needed office, retail and residential accommodation to the city”.

“The acquisition of Boland’s Quay by Google is a significant vote of confidence in the Irish economy and in the future of its operations here and Nama is very pleased to have been part of this successful outcome for all parties,” he said.

Google has invested more than €1 billion in capital investment in Ireland since 2003 and last week announced a €150 million extension to its data centre.

Head of Google in Ireland Fionnuala Meehan said the investment would mean the company has the space to “continue to grow” its EMEA headquarters into the future.

Google director of real estate and construction for EMEA Joe Borrett said the acquisition was a “very important addition to our office portfolio in Dublin”.

“We are looking forward to creating vibrant new civic spaces and retail amenities for our neighbours around Barrow Street to enjoy,” he said.