The head of IBM challenges people to judge her by her actions, which are many 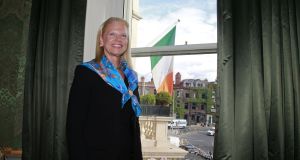 IBM chief executive Ginni Rometty in the Constitution Room at the Shelbourne Hotel, where the company established its Irish business. Photograph: Nick Bradshaw

Now, the Chicago native is relaxing briefly in the Shelbourne Hotel before the relentless official timetable resumes. A small army of IBM staff bustle about the hotel’s halls, stairs and landings, making sure arrivals and departures are frictionless, refreshments are supplied, and schedules are adhered to.

Their boss – one of the business world’s most powerful executives – is pleased with the historic resonance of being where she is. Some 62 years ago, in 1956, IBM opened its new Irish operation with three employees, running the fledgling business out of the Constitution Room in the hotel. That surely makes IBM the longest resident information technology company in the State, dating back to the days when the punchcard was state of the art.

IBM was also among the first to develop a large dedicated “campus” in Ireland, with its expansive Mulhuddart technology site opening in 1997 to build computers and electronic components. Three decades later, manufacturing is gone, replaced with higher-end jobs in services, in research and development, and in design.

What struck her most when she visited the IBM Ireland site and spoke to researchers?

“I’ll tell you what it’s about to me: vibrancy, energy and absolutely being at the intersection of business and technology. What I viewed today was a lot of advances in technology but applied to industry, and I do think that is a distinguishing characteristic of IBM. Energy and application.”

Over a cup of tea, Rometty muses that IBM Ireland’s transformation has mirrored that of the overall group, while also reflecting Ireland’s growth as a technology centre.

“I think in some ways we’ve spearheaded change that’s happened in the country,” she says. “Go back when we started – we originally did hardware here and we did manufacturing. And then this was one of the very first places we actually built industry services, you know, a professional services business operating out of Ireland.”

These days at IBM Ireland, “it’s all around data, AI [artificial intelligence], cloud.” So, she notes, “what we’ve done here is an interesting microcosm of much of IBM. You have research, true research, and you have real development here, plus you have a number of our back-office functions. You in fact have embodied every era with us.”

Driving that arc of major change for a company more than 100 years old and creating a broader market has been one of Rometty’s greatest challenges since she took on the CEO mantle in 2012.

Controversially, she was at the rudder through five consecutive years of declining sales and has overseen redundancies, sharp changes of focus, and outsourcing.

But taking a long and disruptive strategic view also is one of her innate skills: prior to becoming CEO, she was on the team negotiating IBM’s acquisition of PricewaterhouseCooper’s IT consultancy business in 2002, at a time when such a move seemed well outside the company’s core business.

That long decline in sales has been reversed this year, with shares rising recently on several bullish analyst “buy” recommendations due to improving quarterly results.

Rometty – who is passionate about AI and cloud technologies – knows many people still think primarily of big computers when they think of IBM.

The company has been reinvented around data, she says.

“We believe [data] will change all industries and all professions. And so we moved from that hardware company, we added software, we moved into services; and now, today it’s around data, AI and cloud.”

Given IBM’s long residence in Ireland as a tech multinational and major employer, what’s Rometty’s take on what the State should be doing now? Without hesitation, she fires back, “I think of three things.”

First off, policy. “I think Ireland has a wonderful opportunity to continue to be a hub for the future, around data and AI. But that, of course, is dependent on having the free flow of data between countries. And that doesn’t mean you don’t honour GDPR.”

Ireland needs to be “an advocate for the free movement of data and then honouring privacy, however it’s outlined, in every local area.”

Second is “be an early adopter of [new] technologies in Government and in its own businesses. You want to eat your own cooking: if you want to be a hub of this kind of activity for the world, you also want to implement it.”

To be an early adopter and to be a hub, Ireland will need to adopt her third recommendation: develop a broad range of skills.

“They’ll solve some of the most important issues, but they can also create some of the biggest divides in the haves and have-nots of the world.”

IBM is focusing on a range of training initiatives because “you’ve got to prepare people”.

Tech companies most often push the idea that society needs more college graduates, especially in Stem subjects, but Rometty says that, while such degrees are critical, this view overlooks the need for skilled workers of all types that can work with new technologies. An overemphasis on university degrees and loss of vocational careers risks creating “a bifurcated society everywhere”.

To counter this, Rometty has championed a training programme called Pathway to Technology, which starts at secondary-school level and continues beyond, involving company mentorship (more than 400 companies now participate) and internships.

“If you give them a curriculum, offer internships, your employees are mentors, you’ll be amazed what these kids can do. We’re now at 120 schools and have 100,000 kids coming through.”

Some of the disengagement people feel now, reflected in a roiling political landscape, goes back to education and skills. “People feel they don’t have a better future.

“I don’t believe Government can solve this by itself. But a public/private partnership can make a big dent in this issue. And every company I know is willing to help, and they’re willing to do more. This is infinitely solvable. That’s why you cannot pin it on Government. But together we’re going to make a difference.”

So far, IBM is finding that young people finishing its programme “make two times the average median income”. She points to cybersecurity as one area in which the pathway programme can produce skilled employees to fill fast-growing job markets.

She’s also pioneered an IBM programme to bring women back into the company’s workforce, after seeing at first hand, women leaving to have children then lacking the confidence that they still have the needed technical knowledge to return.

“Women are their own worst critic about [saying] ’I’m sure technology has passed me by’. So I said, go check how many women have left for these kinds of reasons, great scientists, and why aren’t they coming back? Sure enough, what we found was that it was confidence.”

IBM now has training “returnships”. “You can go for as little time or long as you want. We have women who come one day, and they’re like, ‘you’re right, I haven’t forgotten anything. I’m in.’ Others go for a couple weeks or months. It has made a huge difference.”

In contrast to many tech and social media companies, Rometty has long pushed a distinctive emphasis at IBM on data privacy, security, ownership and transparency, principles highlighted even in her official corporate biography. The company also has developed sets of public ethical principles around AI, data security and data use.

“If society doesn’t trust these technologies, they’re not going to adopt them. We exist because clients trust us, and the biggest currency they trust us with is their data. We manage 70 per cent of the world’s data, business data. And I’ve always said to our teams that just because you can do something with it doesn’t mean you should,” she says.

IBM’s formal principles can be summed up in three points, she says.

“The first one is you really have to believe the purpose of the technologies you build is to augment what man does, not replace man. We do really believe that. And it shows in many ways in how you build it, what you do with it, what you agree to do.

“The second is key in this day and age: it’s on ownership of the data and the insights. We believe, simply put, the creator owns them. With AI, what’s even more valuable is the engine and the algorithms that have been taught by your data. So, it’s a fallacy to say, well, I’ll just protect my data. Once I’ve run [the data] through, I’ve already captured what I needed to know because I taught the engine with it. And so we say, no, the engine belongs, too, to the creator.

“We have built our AI in a way that we can say, even though you, Walmart, bring all your data, and this gets trained, it won’t go to Amazon. Others cannot say this.”

The final principle is “the idea that these technologies have to be explainable; they can’t be a black box”. Although all the specifics of an algorithm may not need to be spelled out, the reasons it produces certain recommendations during a search should be clear to the user, she says.

On broader privacy issues, she is adamant that the embattled Privacy Shield data flow agreement between the US and EU needs to be strong and functional.

“Look, we were a big advocate of getting Privacy Shield. We’re going to continued to advocate, both in the EU and the US. You want to have free flow of data with the proper governance over it. My view of where we’re at right now is, I think people understand to a greater degree than they did the importance of these things. And so now we need to continue to try to get them through.”

Even with the Trump administration, and some in the EU, pushing for weakening encryption and placing secret “back doors” into communications technologies?

“We have never put in a back door. Never have; never will. For anyone. And we’re the only tech company that can say that, by the way. And that’s what gets back to living by your principles, right? I always say these things are easy to chatter about; judge me by my actions.”

Career: Big Blue all the way. Rometty joined IBM in 1981

Something you might expect: She’s been in Fortune magazine’s annual “50 Most Powerful Women in Business” list every year since 2005

Something that might surprise: She became the third female member of the Augusta National Golf Club in 2014