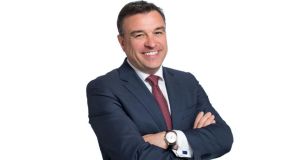 Morgan Browne is chief executive of IIS, a company that provides business management solutions to SMEs.

Browne has worked in the IT industry since leaving school in 1993. He initially worked in the UK providing solutions to the leisure industry, before returning to Ireland in 1998 and joining IIS as an IT support executive.

In 2008 he acquired IIS, transforming the company from a reseller business into a solutions business using SAP technology as the platform.

Since then, Browne has expanded the services and territories of what is now the IIS Group, to become an SAP gold partner and a leading global partner in SAP Business One.

From a small office in Bray with 14 people in 2008 servicing fewer than 60 customers, the company has grown to more than 100 people serving more than 400 customers globally, with offices in Dublin, the UK, the Netherlands and Poland.

What was your “back-to-the- wall” moment and how did you overcome it? In mid-2009 the banks halved our overdraft and credit cards. I lost two deals worth €400,000 that we needed to trade until the end of year. We had no cash flow, new business or access to funds. I turned my attentions to the UK in the hope things were better than in Ireland.

At the same time personally, the stress was difficult and my wife was unwell – meaning I had to spend time looking after my three-year-old daughter, as well as running the business.

If it couldn’t get any worse, I then broke my leg and had been prescribed antidepressants.

Because my back was against the wall, I forced myself twice a week to travel to the UK on crutches. It was during this time I met a business coach, Shane Cradock. He helped changed my mindset. By the end of 2010, through graft and mental determination, we turned things around and had positive momentum going into 2011.

Describe your growth funding path We have had no support from banks to date other than a €50,000 overdraft.

We received R&D funding from Enterprise Ireland to support the development of our next generation of mobile-first solutions.

This funding is helping us to accelerate our growth with new products, as well as localisation for more countries and languages.

What is the hardest thing you have ever done in business? I called it Black Friday. As the recession took hold I had to cut costs.

I had 19 people working within the business. In one day I made five people redundant and forced a 20 per cent pay cut on the remaining staff. At the time we were only 18 months in business and I had major concerns that the rest of the team would leave. I am still proud today that 13 of those 14 people are still with the company.

What red tape hampers growth most? Access to credit in the Irish market is still very much based around property and I am still asked what property I have for collateral when I request a small increase in lending.

IIS has virtually no debt to speak of, but our opportunities to grow the business through acquisition or organic growth are hampered as we cannot get to talk to a financial organisation that truly understands the needs of a technology SME.