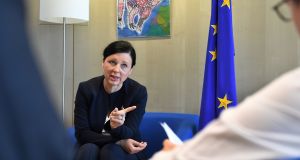 European commissioner for justice, consumers and gender equality Vera Jourová: due to attempts to influence elections via social media, “People do not have a chance to have a free choice because they are objects of manipulation.” Photograph: Emmanuel Dunand/AFP/Getty

Ms Jourová said decisions by Facebook and Google to flag, limit or ban referendum advertising on their platforms before Ireland’s May 25th abortion vote could only be provisional measures.

Political advertising in print and broadcast media has stringent rules, she said, but online advertising was a “black box with no rules” that lent itself to a mix of “fair political campaigning and waves of attack and disinformation”.

“In the IT sector, many influential people say ‘we are just a pipe, we have nothing to do with the dirt floating through the pipe’,” she said in Berlin. But EU capitals must respond to growing fears of citizens that online election advertising content meant “we are becoming dirty ourselves”.

Ms Jourová recalled a trip to Silicon Valley ahead of last year’s Catalan referendum, and the confusion of leading tech executives at European demands to pull problematic social media content.

While US tech companies believed then that such demands had nothing to do with them, she said, subsequent controversies have seen a shift in thinking.

“I believe managers of Facebook and Google when they say ‘we took too much power’ and want the public sector to take some of it back, including decisions on political campaigning,” said Ms Jourová.

Ireland has no modern legislation to regulate the explosion in online election campaigning, which is a national, not an EU, competence. Ms Jourová said every member state “should decide if it is equipped in legislation to guarantee the free political choices of people”.

Born behind the iron curtain in the then Czechoslovakia, she recalled the “brainwashing” of manipulated communist-era elections that offered no free choice.

Today’s situation was not comparable to totalitarianism of the pre-1989 era, she said, “but some features can be seen” in attempts to influence elections via social media. “People do not have a chance to have a free choice because they are objects of manipulation,” she said.

She made clear that, if a US investigation revealed Facebook broke EU data protection rules, she would press the US Federal Trade Commission (FTC) to either fine the company or shut it out of the transatlantic data transfer agreement known as Privacy Shield. “I made clear to the FTC that Europe needs this information as soon as possible,” she said.