ESB teams up with US firm to develop smart network 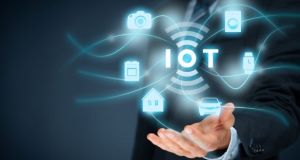 ESB Telecoms will use Silver Spring’s Starfish platform as a service standards-based mesh technology to develop an Internet of Things (IoT) network across the Republic.

Energy provider ESB has teamed up with a US tech firm which is working with the city of Paris to cut its public street lighting bill by up to 30 per cent.

Silver Spring Networks, which has its headquarters in California, has also promised to help the Parisian authorities reduce traffic congestion through its network which connects cabinet-based controllers for street and traffic lights across the city.

The company has just signed an agreement with ESB Telecoms to develop an Internet of Things (IoT) network across the Republic, using Silver Spring’s Starfish platform as a service standards-based mesh technology.

The platform is currently being deployed across the city of London, where it is being used to connect more than 12,000 smart street lights, across an area through which over 450,000 commuters pass through every day.

In addition, Silver Spring has also teamed up with Florida Power and Light on the largest smart street light programme on earth, covering more than 500,000 lights across Miami and south Florida.

IoT is the generic term generally used to describe a world in which everyday items are connected to the internet. Gartner, a research and advisory company, recently forecast that there will be 8.4 billion connected devices in use worldwide by the end of 2017.

While Silver Spring has connected more than 26.7 million devices through programmes with cities and utilities on five continents, Ireland will be the first place in which it is rolling out the Starfish network on a nationwide basis.

“By deploying a standards-based network, we can help municipal, commercial and industrial customers connect services such as smart energy, smart water, smart street lights and traffic controls, to name a few,” he added.

ESB confirmed the deal with the company but didn’t go into detail about what it expected to achieve from the relationship.

“ESB Telecoms Ltd can confirm that it has entered into an agreement with Silver Springs Network to develop an IoT network across Ireland,” a spokeswoman said.

“While still at the early stages, we believe this agreement will enable the acceleration of IoT development nationally, helping Ireland become a leader through the deployment of one of the world’s first standards-based national IoT rollout,” she added.

ESB is by no means the first organisation to look at rolling out an IoT network in Ireland. Irish start-up Davra Networks and Swiss firm Orbiwise last year won contracts to work with the Connect Centre at Trinity College Dublin to establish one known as Pervasive Nation. Also in 2016, VT Networks, a Glasnevin-based firm, rolled out its dedicated SIGFOX network, which covers about 97 per cent of the country.

However, Mr Bell said its standards-based technology was superior to that more commonly available.

“Other IoT network offerings [such as Low Power Wide Area networks] suffer from extremely limited bandwidth, are based on proprietary technology, face severe reliability and scalability challenges, and offer virtually no modern security,” he said.