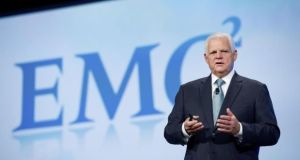 Data storage equipment maker EMC cut its full-year profit forecast as it joins other companies affected by a surge in dollar that crimps demand for US exports and reduces the value of overseas sales when translated back into dollars.

Corporations are adjusting to the new environment after more than a decade of enjoying the benefits of a relatively weak dollar.

IBM on Monday also said it expected dollar appreciation to have a significant impact on its fourth-quarter and 2015 results.

EMC, which expects 45 per cent of revenue from global sales, forecast full-year adjusted profit of $1.90 per share, missing the average analyst expectation by 1 cent. EMC had earlier forecast $1.91 per share for the full year.

The company forecast revenue of $24.5 billion, while analysts on average expected $24.54 billion.

EMC , which employs 3,000 people in Ireland, also cited the timing of its $3 billion share buyback and the revised free cash flow outlook from its unit VMware Inc for the forecast cut.

Analysts on average had expected a profit of 46 cents per share on revenue of $6 billion.

4 No order from DPP to resume inquiry into Anglo auditors