Goal is to make “space travel like air travel,” Musk said during a presentation on Saturday from the company’s test site in Texas 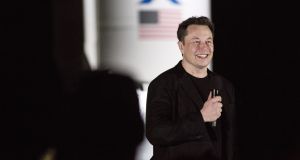 Elon Musk gave space fans an outline of plans for “Starship,” the next-generation vehicle his Space Exploration Technologies Corp expects to use to eventually take humans to Mars.

The goal is to make “space travel like air travel,” Musk said on stage Saturday during a highly-technical presentation from the company’s Boca Chica test site near Brownsville, Texas. “We’re really right on the cusp of what’s physically possible.”

SpaceX currently flies its workhorse Falcon 9 and more powerful Falcon Heavy rockets for customers that include NASA, commercial satellite operators and the US military.

NASA has contracted with Boeing Corp and SpaceX to ferry American astronauts to the International Space Station through what’s known as the Commercial Crew Program, but the timeline for this has repeatedly slipped, and it appears unlikely that either company will fly the first astronauts this year.

During a question and answer session with journalists, Musk responded to NASA Administrator Jim Bridenstine’s Friday tweet that said: “Commercial Crew is years behind schedule.”

Bridenstine also said the agency expects the same level of enthusiasm seen for SpaceX as on “the investments of the American taxpayer”.

“From a SpaceX resource standpoint, our resources are overwhelmingly on Falcon and Dragon,” Musk said. “Let’s be clear, it was really quite a small percentage of SpaceX that did Starship.”

SpaceX is valued at $34 billion, according to an analysis by EquityZen, a marketplace for shares in pre-IPO technology companies. Musk founded the Hawthorne, California-based company in 2002. Though he is more widely known for being the CEO of electric car maker Tesla, space travel has long been his passion.

SpaceX is building Starship vehicles in both Boca Chica and Cape Canaveral, Florida. Musk said that SpaceX teams are competing internally, and the first crewed mission could leave from Boca Chica. SpaceX is hoping to acquire residential properties in the hamlet of Boca Chica Village and has sent buyout offers to households. - Bloomberg