Move will affect areas that can be served by State’s €1.5bn National Broadband Plan 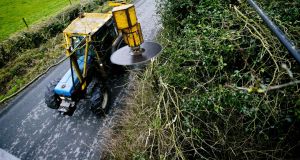 Eir will today announce the locations of 100,000 homes in 200 rural communities to which it will roll out high-speed fibre broadband over the next year.

The homes are among a group of 300,000 that were originally due to be part of the State’s subsidised €1.5 billion National Broadband Plan (NBP), the tender for which is due to be awarded later this year.

Eir, however, intends to wire them up anyway, with fibre that can be run straight into buildings from a network strung across telegraph poles. It is aiming for a total fibre footprint of 1.9 million premises by 2020.

Its announcement today of the first of these rural locations means that, under State-aid rules, these homes likely cannot now be included in the NBP, thus potentially making the subsidised scheme less lucrative for Eir’s bidding rivals.

Eir will announce the rollout of broadband with speeds of up to 1,000 megabytes per second (1,000 MB), the fastest speeds available to consumers, in townlands and villages in every county in Ireland. Many of these locations would be considered commercial sweet spots in the rural regions that were to have been part of NBP.

Near the west coast, for example, Eir will announce the rollout of fibre to 1,400 homes in Claregalway, 660 homes in Spiddal in Connemara, as well as 18 other rural locations across Galway.

Rural areas of Kerry, currently among the most deprived in terms of the availability of broadband services, will also be boosted over the next 12 months. Dingle and Glenbeigh are among those listed.

To the far northern reaches of the State, isolated towns and villages such as Falcarragh and Carrigart in Donegal are also due to be hooked up. To the very south, homes in rural Cork are included, such as Crosshaven and Blarney.

Across to the east, some areas on the outskirts of Dublin will be wired up, such as 580 homes around Ballyboughal in the rural north of the county.

All counties will have some homes among the 100,000 targeted for the next year, but the heaviest concentration of communities is in Galway, Donegal, Wexford, Meath and Louth.

The smallest grouping targeted is 30 homes around Carron near the Burren in Clare. The largest include 1,370 in Bunbeg in Donegal, 1,210 in Inch in Wexford and 1,220 in Castlegarren in Sligo.

In order to string the fibre along the poles, Eir must trim back miles of hedgerows. This is illegal, however, between the months of March and August to protect local wildlife. It is understood the company prioritised the trimming of hedgerows ahead of the March 1st deadline to facilitate its works.

Separately, Eir is also opening applications online for 50 new roles in its apprentice recruitment programme to work on the fibre project. The roles are aimed at school leavers who want skills-based training.

“We are the only provider with a truly national plan to connect rural communities across Ireland to high-speed broadband,” said Carolan Lennon, managing director of its wholesale division, Open Eir.