Dublin Web Summit now among the events of the year

Event calculated to be worth €24m to local economy 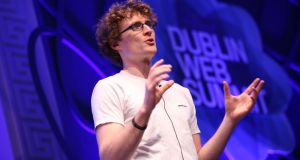 Dublin Web Summit founder Paddy Cosgrave: aims to send 400-plus international journalists at the summit home with a taste for Irish food

Few tech events have made as big an impact in such a short space of time as the Dublin Web Summit.

Founded just three years ago from the bedroom of Paddy Cosgrave (above), the first event in 2010 had no backers and few believers. Fewer than 30 people spoke at the conference, there was only one workshop and just three start-ups exhibited. The wifi broke and the audio-visual didn’t work. And there wasn’t a bite of food to be had.

This year an estimated 10,000 people from 100 countries will attend the summit including more than 350 speakers.

Some of the biggest names in tech, including Elon Musk, Dropbox co-founder Drew Houston, AOL chief executive Tim Armstrong and Evernote boss Phil Libin, will be in attendance.

In short, the event is a massive coup for Ireland and its organisers, calculated to be worth €24 million to the local economy. Ireland has made a good job of building a proto-Silicon Valley in recent years, with the Government hoping to position Dublin as the tech capital of Europe.

Events such as this bring us one step closer, helping to strengthen Ireland as a hub of technology, while showcasing not just our talents in IT and entrepreneurship but sectors such as food, too.

This week’s web summit won’t be just about tech, with Cosgrave also opting to show off Ireland’s talent for good food.

As well as a tech hub, he says Ireland should be the world’s food capital, with no other country producing more food per capita. Cosgrave aims to send the 400-plus international journalists travelling to the event home with not just knowledge of tech but a taste for Irish food.

Over the two days of the summit, attendees will be treated to 400,000 tastings, with food from Irish chefs, bakers, farmers, cheese-makers and fishermen, as well as beverages from artisan craft brewers and juice-makers.

The web summit may not have been part of the Gathering, but in terms of showcasing Ireland on the world stage, it could potentially be the best business event of the year.