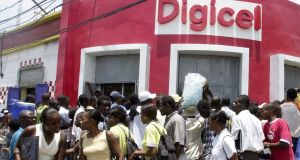 Digicel’s office in Port-au-Prince, Haiti. The company’s restructuring will involve cutting one in four jobs and signing a new partnership with a Chinese group, ZTE. Photograph: Thony Belizaire/AFP/Getty Images

Denis O’Brien’s Digicel telecoms group is shedding more than 1,500 jobs over the next 18 months in an overhaul of the debt-laden business.

The Bermuda-based company hired consultants in December to aid it in cutting a €6.2 billion debt, which credit analysts had labelled “unsustainable”.

On Wednesday, Digicel announced a restructuring that involves cutting 25 per cent of its workforce and signing a new deal with a Chinese group, ZTE.

Digicel’s statement did not say how many people it employed, but figures published ahead of an abandoned flotation bid in 2015 showed that it had 6,334 permanent staff and a further 989 on temporary contracts.

Those numbers have not altered significantly since then. It is understood that Mr O’Brien’s group will focus on its permanent staff when it is actually cutting jobs and that the final tally is likely to be more than 1,500.

According to a statement, Digicel intends taking the first step in reducing its workforce on March 1st when it will open an “enhanced” voluntary redundancy deal.

The company did not say how much it hopes to save from the move, or any of the other measures that it intends adopting in its restructuring programme, which it has dubbed Digicel 2030.

Owned and founded by Mr O’Brien, who is also its chairman, Digicel runs telecoms networks in 31 countries in the Caribbean, Central America and south Pacific.

The company owes its creditors €6.2 billion, more than six times its earnings, which have been in decline for almost three years. Its executives want to cut this liability to about 4½ times what Digicel earns.

Its problems are complicated by the fact that its sales are in a number of different currencies whose exchange rates have been falling against the dollar, in which most of Digicel’s debts are denominated.

Last December, Michael Chakardijan, an analyst with US research firm, Creditsights, warned at a conference that Digicel’s debt was so high that it left little room for underperformance. The company responded by saying that it fundamentally disagreed with this.

Around the same time it hired financial consultants McKinsey and Goetzpartners to advise it on cutting its debts and on how to tackle its falling earnings. The redundancies and other measures outlined in Wednesday’s announcement resulted from this.

It has hired ZTE to work on revamping its networks. Digicel began as a mobile operator but has had to move into broadband, which requires fibre-optic cables, and other telecoms services, to maintain its position in its various markets.

ZTE is a listed Chinese telecommunications group that does everything from building and maintaining networks to selling equipment and services. It had €43 billion in assets at the end of last September.

Digicel has spent $1.65 billion over the last three years building a fibre network and boosting its mobile broadband.

The group also plans to centralise its operations into a number of regional hubs, two for the Caribbean and Central American regions and two for the south Pacific.

These will handle the group’s billing, payroll and administration and allow staff on the ground to focus on sales.

Mr O’Brien announced plans to float part of Digicel on the New York Stock Exchange in June 2015 raising €1.7 billion to pay off part of its debt and begin reinvesting in its networks.

However, he withdrew this the following October saying that investors were not prepared to pay what the company was worth.