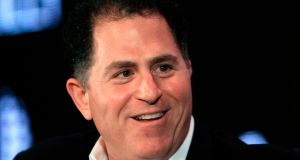 “We are pleased to have won another battle in the Dell war but the war itself is far from over. More to follow.”

That cautiously optimistic tweet last Friday from Dell Computer founder Michael Dell signalled a major strategic gain in an ongoing buyout campaign for the man who famously launched one of the world’s largest computer makers from his college dormitory room.

Shareholders had been due to vote that day on Dell’s latest attempt in recent months to buy back the firm he founded three decades ago, and were expected to reject it. But last-minute negotiations and a fresh offer from Dell and his co-bidder, private equity firm Silver Lake Partners, saw the board agree to move the vote to September 12th. Critically, the board also agreed to change shareholder-voting procedures so that abstentions are no longer counted as “no” votes. Many analysts believe that gives Michael Dell a good chance of victory.

The new deal-sweetener put forward by Dell in his $24 billion (€18 billion) buyout offer would increase the basic bid by 10 US cents to $13.75 a share, and also add a 13 cent per share special dividend. An add-on likely to please many shareholders is an agreement to pay a third-quarter dividend of eight cents as well. Overall, the new bid would raise Dell’s offer by at least $350 million, possibly up to $470 million.

As chairman and chief executive, Dell still runs the company, but he’s been under serious threat for some time by billionaire activist investor Carl Icahn, who owns a significant portion of Dell shares (8.9 per cent after additional share purchases last week, compared to Dell’s holding of 15.7 per cent).

The 77-year-old Icahn, best-known for his acquisition of the ailing airliner TWA, which was subsequently asset-stripped, leads a vocal, rebel shareholder faction which opposes Dell’s ongoing attempts to buy back his company and take it private.

Icahn, who says Dell’s offers have repeatedly undervalued the company, has made acerbic tweets on the situation, such as the recent: “All would be swell at Dell if Michael and the board bid farewell.” He wants to remove Dell and the entire board, but hasn’t offered much detail on what direction the company should take after that.

New focus
For his part, Dell says he wants to move the PC maker away from the volatility of manufacturing, towards a new focus as a services company for corporate clients. He argues the company needs to go private to give it time to restructure, away from quarterly financial reporting pressures to Wall Street and shareholders.

He certainly has the deep pockets – a $15 billion fortune – to try and wrest back the company that bears his name. According to regulatory filings, before his new offer, Dell had already promised $4.5 billion in cash and stock towards the purchase, with the remainder of the tab covered by Silver Lake.

It’s all a far cry from the days when Dell was king of the PC. The fast growth of the internet drove demand for home PCs, and then laptops.

But then the sector began to commoditise – in part, thanks to low-cost, fast-production manufacturers like Dell. As prices dropped, margins shrank, and, as Ireland painfully discovered when Dell shifted a huge manufacturing facility from Limerick to Poland, PC makers migrated operations to low-cost regions in an effort to improve the bottom line.

For example, it failed to get a smartphone or tablet into a market that clearly wanted both. And management seemed strangely blinkered about demand for its products. A year ago, internal sales predictions for the quarter were close to $300 million off the actual figures, the worst of seven consecutive quarters in which internal sales predictions were well off actual results.

In its most recent results, published in May, Dell – still the third-largest PC maker – posted a 79 per cent drop in profits, with PC sales down 9 per cent. Clearly, it needs new ideas.

The problem is that successful makeover stories among computer manufacturers – all of which are facing the predicted eventual demise of the PC – are rare. IBM, which recreated itself successfully in the 1990s, is being held up as a model for Dell, but IBM was already a far more diverse, and a more corporate and services-focused company, than Dell from the start.

Apple has been spectacularly successful at shifting away from making Macs as its main business to create high-end, high-profit devices and becoming a broker for content such as music, apps, books and video. But that option isn’t much of a fit for Dell.

And, of course, it was one Michael Dell who famously (and in retrospect, ironically) quipped in 1997, when Steve Jobs returned to the company he founded, “I’d shut it down and give the money back to the shareholders”. Perhaps now he wishes he’d bought Apple, instead.

Then there was Compaq, one-time principal rival of Dell, which had its moment in 1998 when it bought computing veteran Digital. That now seems even more bizarre than it did at the time, but it’s evidence of just how powerful PC manufacturers were in that period. Compaq was eventually acquired by Dell rival HP, itself now struggling, like IBM, to move firmly into new areas of computing services.

And Microsoft, though not a PC maker, became mighty as supplier of the machine’s most popular operating system, Windows, and the Office productivity suite. Yet the PC’s decline has seen those cash cows grow ever thinner, leaving the company struggling to find a reliable new income generator.

All of which suggests that even if, come September, Michael Dell does successfully win this war, like all war-mongers, he will find he has a more fearful challenge ahead with the post-war restructuring that will make or break Dell.

1 Opioid executive admits to ‘no morals’ ahead of prison term
2 Are there annual limits on inheritances or gifts to a child?
3 South Dublin Credit Union members urged to borrow more to ensure survival
4 Who are Ireland’s 17 billionaires?
5 American YouTubers embrace the crisp sandwich
Real news has value SUBSCRIBE