DCU students in start-up mode after transcription tool takes off

Happy Scribe has proved a hit with researchers and journalists internationally 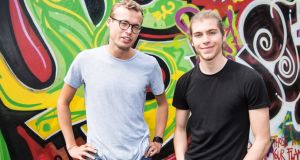 Two Dublin City University (DCU) students who created a tool to automatically transcribe audio files to reduce their college workloads, are setting up in business after the software proved popular with journalists and researchers from across the world.

André Bastie and Marc Assens developed the platform in their living room three months ago and circulated it to other students via Research.Gate, a social networking site for researchers.

However, an article about Happy Scribe published by Poynter.org, the online home of the Poynter Institute, led thousands of journalists to try out the software, leading servers to crash.

Since then Mr Bastie and Mr Assens have joined the DCU UStart student accelerator programme, given the tool a facelift to make it more usable,and started to charge a small sum for the formerly free software.

The two students are now looking to build a full business out of what was meant to be a quick workaround.

Mr Bastie, who has been completing his master’s degree in electronic commerce at DCU, told The Irish Times that the idea for the tool came after he needed to transcribe hours of interviews for a research project he was writing on social entrepreneurs in Ireland.

He asked his flatmate about a quicker way to transcribe and Mr Assens, a final year undergraduate student in computer science at the Polytechnic University of Catalonia, came up with Happy Scribe.

The easy-to-use programme enables researchers and journalists to upload large audio files and get transcripts automatically to their mailbox in minutes along with an editing tool.

Mr Bastie said Happy Scribe, which is available in more than 80 languages and accents, can save customers up to five hours per hour of recording.

The company now charges €0.009 per minute of audio to cover its costs, with payments made through Stripe.

Mr Bastie said that, in addition to being considerably cheaper than most speech-to-text software, an additional benefit of Happy Scribe is that the editing tool is interactive so as you listen back to transcribed audio it outlines on the text where you are so that any errors can be easily fixed.

A follow-up article on Happy Scribe published on Poynter.org last week has led to a further spike in the use of the app.

The two students are relocating to Barcelona shortly so that Mr Assens can undertake a master’s degree. Mr Bastie meanwhile intends to work full-time on the burgeoning business.

Happy Scribe was recently selected to participate in the Ireland Fund Business Plan Competition for early-stage entrepreneurs, which is run in partnership with NDRC.

“The business hasn’t cost us a euro yet and we’re hoping that we might be able to get some money through participating in the competition,” said Mr Bastie. “We’re also considering a possible seed round in the future but first we want to make the tool better because it is only three months old and we have thousands of improvements we want to add.”