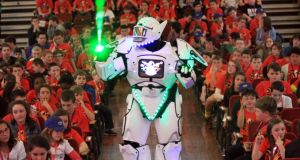 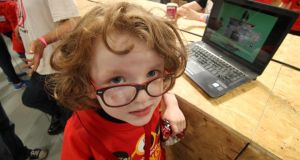 Thomas Duggan from Portarlington at Coder Dojo in the RDS with his project, “All About Me”. Photograph: Nick Bradshaw 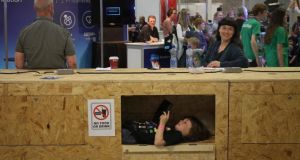 Harvey Brennan from Walkinstown at Coder Dojo in the RDS. Photograph: Nick Bradshaw

Darragh Walsh flashes a small electronic tag against the back of his smartphone and begins to explain how his self-designed app allows people to keep tabs on each other’s movements.

Stop listening for a second and this 11-year-old will quickly lose you. He speaks in fluent CoderDojo and he, like growing numbers of children his age, simply assumes that you can keep up.

Take a step back and Darragh’s voice trails off into the murmur of hundreds of children explaining their concepts to teams of judges at the annual Coolest Projects Awards at the RDS in Dublin on Saturday.

Now in its fourth year, and rapidly growing, it is a showcase of the global CoderDojo movement, the community-based, free computer coding classes booted-up by James Whelton in 2011.

As a sort of culmination of a year’s programming by children from all over Ireland and elsewhere, its momentum has seen it outgrow its original DCU base, and from an initial 20 children to 500 this year (with 5,000 registered visitors at Saturday’s free event).

There are 12 winners in 12 categories. They range from younger students in the “scratch” coding stage up to 17-year-olds steeped in computer games, web-based projects and hardware.

What is particularly noticeable, though, is the age at which they’re starting out. In the giant RDS hall filled with plywood exhibition spaces, there are purposely built steps so younger children can reach their projects. One girl needs two fingers to punch the keys on her laptop.

“They want to change the world,” she adds.

This year CoderDojo is in 57 countries, she says. “It’s gone from being Irish to being international to being absolutely global. The philosophy we have is that we want to keep giving every child access to the skills they need.”

The children themselves are visibly immersed. Parents waste no time in pointing out just how much, lauding the confidence and encouragement the CoderDojo model provides.

Rachel Schoene, whose seven-year-old Lexi secured the overall prize in the design category, explains: “We struggled for years [to find her an extra-curricular activity]: ballet, gymnastics, hip-hop, soccer and she wouldn’t get into anything. And then CoderDojo came along and saved my sanity. Like a duck to water.”

Lexi’s impressive concept is a game in which a series of questions, once answered, lead the player to discover what type of cookie they are. Lexi, she says, is an Oreo.

David Brett (12) a sixth class student from Passage West in Cork, took the Social Project prize for his game Marlon Brando Oceanic Avenger. He even has his own branded baseball hat.

“It’s a game about raising awareness for oceanic related ecological issues,” he says. The player is Marlin Brando – a play on the fish of course – who busies himself knocking out “dumpers” of toxic waste as they in turn attempt to harpoon him.

“[CoderDojo] is teaching kids how to express themselves and to say that anyone can do something big as well. It’s a very social place,” he says.

Even without winning prizes, the enjoyment of programming is obvious. Maia Kelly Murphy (9) designed her “awesome” animation about a girl who “makes smoothies and goes to the playground”. A nifty piece of programming after just eight weeks in CoderDojo, which is “the highlight of my week”, she says with gusto.

Six-year-old Thomás Duggan from Portarlington, shows off a virtual tour of his bedroom and toys in which his pet dinosaur teaches you a few things about their world 66 million years ago, and Calvin and Hobbes quiz each other on sums.

Looking on at this junior ingenuity, his parents just shrug their shoulders.

“Trying to get him off the laptop is a problem.”