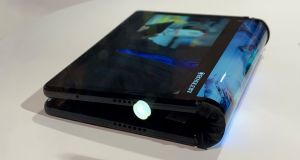 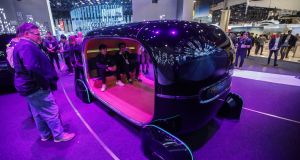 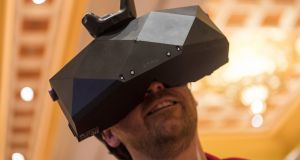 Robots, 8K TVs and artificial intelligence: the annual CES tech show is in full swing in Las Vegas. The showcase brings together the world’s largest technology companies and gives a platform to some of the smallest start-ups as they lay out the roadmap for their products in the years to come.

More than 180,000 people are expected to pass through the convention centre’s doors during the four-day event this week.

Among the gadgets on the show floor was the Royole FlexPai, the world’s first foldable smartphone, complete with a flexible screen that means it can be used as either a tablet or a smartphone.

The device has many of the features found on traditional flagship smartphones – an AMOLED display, dual camera system and an operating system based on Android – but with the addition of a screen that can bend freely between zero and 180 degrees.

Robotics and artificial intelligence also featured heavily. The Omron Forpheus robot is a table tennis tutor which learns from players and adjusts its own ability to promote longer rallies and coach human players.

This version is actually the fifth generation of the robot, but is the first to feature elbow and wrist-like movements, enabling the robot to place top and backspin on the ball. The robot also uses its built-in camera to analyse player movement and form compared to that of pro players and offer personalised coaching based on the comparison.

Another form of artificial intelligence with plenty of prominence at CES 2019 is the Google Assistant. Google announced at the show that the Assistant is to be given enhanced interpretation and navigation multi-tasking tools in 2019.

The new interpretation tool will launch when users say phrases such as “Hey Google, be my French interpreter”, and will give real-time spoken and written translation to aid conversation, Google says.

An update to the Assistant in Google Maps has also been announced, enabling users to use voice commands to share their arrival time with friends or family as well as reply to text messages – with the Assistant taking down voice dictation – while users continue to navigate using Maps.

Proving that new technology does not have to be complicated, Sony’s latest line-up of speakers includes the GTK-PG10, a speaker designed for outdoor parties that comes with a fold-out table and cup holder.

The splashproof top panel can withstand any drink spillage, while the speaker also comes with a microphone input should users wish to take on some karaoke.

There were a handful of Irish companies making their presence known at the event, with start-up such as BionicGym, which makes a wearable exercise device, based in the Eureka Park area of the exhibition. Eureka Park typically houses the start-ups, and has grown since its addition to the event in 2012. In 2016, the Consumer Technology Association implemented a formal application process for Eureka Park to restrict entry to the exhibition to only the most innovative start-ups for the 2017 event.

Taoglas, an Irish company which designs and makes high-tech antennae, used the show to make the announcement that it had acquired a US rival. The Enniscorthy-headquartered company is focused on next-generation technologies in 5G, the internet of things (IoT) and satellite navigation. It bought Florida-based ThinkWireless, which specialises in the design, development and production of combination antenna systems for commercial vehicles, for an undisclosed sum. ThinkWireless founder and chief executive Dr Argy Petros and the company’s director of radio frequency technology, Pierre Wassom, will remain with the group following the transaction.

In recent years, CES has featured an increasing number of carmakers showcasing entertainment and autonomous driving technology as excitement about the technology has taken hold. Although self-driving cars are still some way off, carmakers are still showcasing their wares at the event.

Toyota said it would share with rivals an automated safety system that uses self-driving technology to keep cars from crashing. The system, known as Guardian, will take control of a car and steer it around an impending crash or accelerate out of the path of an oncoming vehicle running a red light. The technology due to hit the road early next decade has the potential to save so many lives that the automaker felt compelled to share it with any company that would like to use it, said Gill Pratt, chief executive officer of the Toyota Research Institute. “We were thinking about what would be good for society,” he said.

Daimler also used the show to announce it would sell a heavy-duty truck in the United States this year that is able to brake, accelerate and steer at all speeds on its own.

Nissan unveiled a new version of the Leaf that narrows the driving-range gap between its electric car and Tesla’s Model 3. The Leaf e+ boasts a more energy-dense battery that extends range by about 40 per cent, to as much as 226 miles (363km). That compares with the 220- to 310-mile range for the Model 3. It will go on sale in Ireland this summer.

The event wasn’t without controversy though, as sex toy firm Lora DiCarlo accused the show of gender bias. In an open letter on the company’s website, founder Lora Haddock claimed the Ose Massage had won a CES Robotics Innovation Award, but the show had rescinded it. She said organisers had initially cited a rule around the ability to disqualify any device deemed “immoral, obscene, indecent, profane or not in keeping with CTA’s (Consumer Technology Association) image”, but subsequently claimed the device did not fit in the robotics and drone category.

“Putting aside for a moment the implication that women’s sexual wellness products are somehow immoral or obscene – if we didn’t fit their policy, how in the world did our application even get past the first round of vetting by CTA staff, let alone receive high marks across the board from their expert judges?” Ms Haddock wrote.

1 Election 2020: Parties' pledges on housing simply don’t add up
2 Britain after Brexit will not be alone, but it will be lonelier
3 Explainer: what is the row about SF’s multinational tax plan?
4 737 Max crisis drags Boeing to first loss since 1997
5 Coronavirus shuts down Starbucks, Toyota and BA
Real news has value SUBSCRIBE