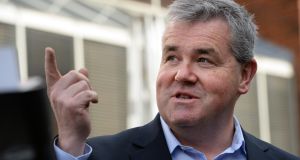 John Herlihy: moving to LinkedIn, where he will take up the role of managing director for Europe, the Middle East and Africa. Photograph: Cyril Byrne.

It would seem Google’s original management team in Ireland are a very talented bunch. They may have all worked together in the search giant’s early days in Dublin, but now they are spreading their wings and taking to the highest ranks of the top tech players.

From Facebook to SoundCloud, Twitter to Flipboard, and now LinkedIn, Colm Long, Ronan Harris, Stephen McIntyre, Sonia Anne Flynn and John Herlihy are taking over the world of technology.

The five were part of Google’s management team in Dublin, during the company’s first years in Ireland.

Long then became head of Facebook’s global user operations, before being snapped up by Flipboard as the popular news-reading app’s chief revenue officer.

Harris has become the head of Google in Ireland while McIntyre is head honcho at Twitter’s international headquarters in Dublin.

Flynn rose through the ranks at Facebook to become managing director of the social network’s Irish operations, before taking up the position of international vice-president at online audio distribution platform SoundCloud.

Herlihy rose to head up Google’s global advertising, as well as the company’s Irish operations.

Now he is moving on to professional networking service LinkedIn, where he will take up the role of managing director for Europe, the Middle East and Africa (EMEA).

The Limerick native, who left Google in April of this year, grew the search giant from 50 employees to more than 2,500 staff during his tenure. Under his leadership Google acquired its EMEA campus on Barrow Street in Dublin, located a new data centre in Ireland and established the Foundry, Google’s first centre for digital excellence in Europe.

He will now take over from Ariel Eckstein, who has been LinkedIn’s managing director in EMEA for the past four years.

Just this week, LinkedIn raised its full-year profit and revenue forecasts on the back of positive results, so Herlihy is certainly joining the company as it is on the up.