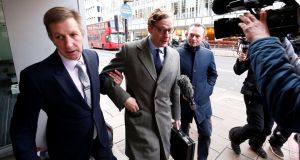 Investors who backed a rebranding of Cambridge Analytica are in a stand-off with former chief executive Alexander Nix after he allegedly withdrew more than $8 million (€7.1 million ) from the scandal-hit data firm shortly before it collapsed.

Several people involved in the dispute told the Financial Times the withdrawal came shortly after Mr Nix learned British media was reporting on allegations about his company’s role in a massive leak of Facebook user data in March. Mr Nix did not respond to multiple requests for comment.

According to these people, the investors are pressing Mr Nix to repay the money to Cambridge Analytica employees and investors.

They said Emerdata, a company set up last year to acquire and rebrand Cambridge Analytica and a related company, SCL Group, had raised $19 million from powerful international investors in January to expand the company’s services and bid for more commercial work.

The money ran out quickly, the people said, because of outstanding bills to advertisers and other suppliers, and because of the alleged withdrawal by Mr Nix. According to some of the people, Mr Nix has indicated that he intends to repay part of the money. One person added that Mr Nix said the withdrawal was made in exchange for unbooked services.

Bankruptcy filings in New York show that Cambridge Analytica received an $8.8 million loan from Emerdata before it entered administration, though it is not clear what the loan was intended for. Documents show the debt is classified as an unsecured “non-priority” loan that might not have to be returned.

Governments have access to vast quantities of data; on both their own citizens and foreign nationals. These data can be used to help governments identify, segment and target key audiences for campaigns of information or influence

Mr Nix, who was suspended from Cambridge Analytica before the company closed, will appear before British lawmakers on Wednesday to testify about his role in the company’s harvesting the information of tens of millions of Facebook users without consent.

According to several insiders, most of the company’s employees have been dismissed without severance pay after Cambridge Analytica and a web of related entities were wound up over the past month. However, investors and employees have argued that staff should receive redundancy payments, they said.

Documents seen by the FT confirm that a holding company was established to acquire Cambridge Analytica and SCL Group, which had previously focused on defence and political work, including Donald Trump’s presidential campaign.

These documents and a private placing memorandum set out plans to raise about $30 million to pitch for more commercially-related work and develop a “high-volume core business” with off-the-shelf data-targeting products.

“This pivot will address the scalability problems associated with the ‘data­science as a service business model’, where the growth of the company is constrained by a limited and highly­ competitive talent pool,” the memorandum said.

It added: “Governments have access to vast quantities of data; on both their own citizens and foreign nationals. These data can be used to help governments identify, segment and target key audiences for campaigns of information or influence.”

Cambridge Analytica also formed a working group of senior ex-military personnel and government executives to identify products and services most relevant to government clients, according to the documents.

Company filings in the UK show Emerdata earlier this year issued nearly 2m shares and added several new directors to its board including Rebekah and Jennifer Mercer, the daughters of hedge fund billionaire and prominent Trump supporter Robert Mercer.

Johnson Ko, executive director of Reorient Group, was also added as a director of Emerdata in January. Mr Ko is a business partner of Erik Prince, another Trump associate and the founder of private mercenary group Blackwater, at the security firm Frontier Services Group.

Cambridge Analytica saw an exodus of clients following the revelations by UK media outlets The Observer and Channel 4 over its use of Facebook data in political campaigns and an undercover Channel 4 documentary that showed Mr Nix suggesting he could entrap the opponents of clients by offering bribes.

People close to the company said Cambridge Analytica was faced with large legal bills and press relations fees after it attempted to defuse the crisis by launching a website intended to explain the “facts behind the Facebook” story.

The company now has assets of less than $500,000 and liabilities of $8.8 million, according to unaudited financial statements filed as part of the bankruptcy proceedings. Cambridge Analytica’s revenue dropped sharply from $25.3 million in 2016 to $5.2 million in 2017, the filings reveal. It also recorded a net operating loss of $13.5 million in 2017.

1 Irish company paid €1.2m a year by collapsed Blumenthal-linked Australian restaurant
2 Hugo MacNeill steps back from Goldman Sachs role
3 Tax shifts won’t drive multinationals out of Ireland - Moody’s
4 Why bosses should not be afraid of speaking out on Instagram
5 ‘I wouldn’t be a big saver. I tend to buy now and repent at leisure!’
Real news has value SUBSCRIBE