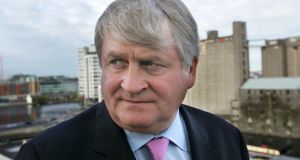 Denis O’Brien: Called off the initial public offering at the 11th hour after investors declined to meet his valuation of the business. Photograph: Matt Kavanagh

As Denis O’Brien tells it, he woke up yesterday morning feeling “very happy” at his decision on Tuesday night to pull Digicel’s planned $2 billion (€1.77 billion) stock market debut in New York, something that had been carefully planned for the previous six months.

“Why would you sell your front garden when you know it’s worth a lot of money and why would you sell at a discount?” he told CNBC yesterday by way of explaining the decision to call off the initial public offering (IPO) at the 11th hour after investors declined to meet his valuation of the business. It’s not clear how he felt about the Dáil agreeing on the same day to mount a defence to his legal challenge against the Committee on Procedure and Privileges.

O’Brien’s legal action against the committee was adjourned in court yesterday to allow for the further exchange of legal documents between the sides. The State’s defence must be provided by October 23rd.

O’Brien initiated his action after the committee ruled that Social Democrat TD Catherine Murphy and Sinn Féin TD Pearse Doherty had not abused privilege when they made claims against him in the Dáil. These relate to the refinancing of his €300 million-plus in loans with State-owned Irish Bank Resolution Corporation and the sale of Siteserv for €45.4 million to Millington, a company controlled by O’Brien, in a transaction that effectively crystallised a loss of €110 million for taxpayers.

It follows a legal action earlier this year to prevent RTÉ from airing details of his banking arrangements with IBRC, which was placed into liquidation by the State in February 2013.

Both of these legal spats raised eyebrows in Ireland. Why take on the State broadcaster and the national parliament in such a confrontational manner?

The IBRC controversy has led to the Government establishing a commission of investigation into certain transactions involving the institution and allegations of preferential treatment towards large borrowers.

O’Brien secured control of INM’s boardroom in 2012 following a bitter and drawn-out dispute with Sir Anthony O’Reilly over how the business was being run. By his own admission, O’Brien lost more than €500 million personally on INM.

Now chaired by O’Brien’s long-time business associate Leslie Buckley, INM has been radically restructured, shedding its international businesses to focus its efforts on the island of Ireland. It is back in profit and has flagged its intention to resume a dividend payment to shareholders.

O’Brien also owns the country’s two independent national radio stations, Today FM and Newstalk, along with a number of local stations including 98FM, Spin and TXM.

These are controlled by his Communicorp pan-European media group, which is based in Dublin. Digital marketing and advertising specialist Ican is also in that stable.

O’Brien is also the controlling shareholder in Siteserv, the infrastructure and utilities services support group, that has a contract with Irish Water for the installation of meters. Siteserv is another Irish company that O’Brien has restructured and returned to profitability.

O’Brien also controls Topaz, the country’s biggest fuel provider, following a battle with former shareholder Ion Equity to purchase the company’s loans from IBRC. Topaz is set to consolidate its position in the market by acquiring Esso’s network of Irish petrol stations.

He also owns the five-star Ballynahinch Castle in Co Galway, the Beacon private hospital in Sandyford, Co Dublin, online marketplace Buyandsell.ie along with various property interests, including the new LXV Building on the corner of St Stephen’s Green and Earlsfort Terrace, which is being built by former bankrupt Irish developer Bernard McNamara.

O’Brien is also an active donor to the Ireland Funds, which provides millions of euro each year in private funding for various projects across the island.

Farther afield, in addition to his interests in Digicel, O’Brien owns the Quinta do Lago holiday and golf resort in Portugal, which was the subject of two offers earlier this year. O’Brien has owned the resort since the late 1990s but it is not clear if a sale will proceed.

However, he did acquire a hotel near his PGA Catalunya golf resort outside Barcelona in Spain, according to reports in The Irish Times last month. The Hotel Melia is to undergo an extensive refurbishment and upgrading of its 150 bedrooms with some €44 million being spent on the purchase and redevelopment of the hotel, which will reopen next year.

He also has a shareholding in Celtic Football Club and committed $48 million to the construction of a hotel in post-earthquake Haiti. The hotel opened this year under the Marriott brand.

Haiti is one of Digicel’s biggest markets and the company has spent about $100 million on various community initiatives in the impoverished country.

O’Brien is also well connected with former US president Bill Clinton and his wife Hillary, who is seeking the Democratic nomination for next year’s White House elections.

According to the Clinton Foundation’s website, O’Brien and Digicel have donated between $5 million and $10 million to the charity, putting him in the same company as the Elton John Aids Foundation, the Coca-Cola Company and the government of the Netherlands.

O’Brien has also been busy selling assets in recent times, leading to speculation about his personal finances. In the late summer of 2014, he sold off his stake in Aer Lingus, netting more than €20 million for the share sale.

The shares had originally been acquired to help Aer Lingus ward off bids from Irish rival Ryanair. After selling his shares in Aer Lingus, O’Brien expressed his opposition to IAG’s takeover of the Irish airline.

In addition to considering offers of about €220 million for Quinta do Lago, O’Brien put his corporate jet up for sale in June for $67 million, although he was reported to have decided to replace it with a new Gulfstream model for a similar price.

Nobody can afford to lose more than €500 million on an investment, as happened to O’Brien with INM, it is argued, while he has also had to refinance his substantial IBRC borrowings.

Yet the structure of Digicel’s proposed IPO would appear to contradict this theory. While O’Brien was surrendering 40 per cent of the equity in Digicel, he was not taking any money off the table directly.

His investment vehicle Island Capital stood to earn up to $10 million as an advisory fee from a successful IPO that would have been small compared with the hundreds of millions O’Brien could conceivably have earned from a share sale.

Instead, the proceeds were earmarked to repay some of Digicel’s $6.5 billion debts and to fund about $400 million of new media acquisitions.

He has also earned a hefty $1.1 billion from Digicel in dividend payments over the past three years and currently receives $10 million per quarter from the company.

Then again, the IPO would have placed a paper valuation on O’Brien’s holding, which he could have leveraged to bolster his finances. Had the Digicel IPO gone through at the midpoint of price range proposed by the company, O’Brien stock would have been worth a cool $2.7 billion, albeit with lock-up provisions preventing him from selling shares for six months.

A successful IPO in New York would have also given O’Brien enormous credibility. No matter how hard he tries, he struggles to distance himself from the findings of the second report of the Moriarty tribunal, which found that former communications minister Michael Lowry assisted O’Brien in his bid to secure a second mobile phone licence for Esat Digifone in the 1990s.

O’Brien has disputed the tribunal findings but they continue to dog him.

It also gave him huge creditability with investors and served him well as he tapped the bond markets many times to fund Digicel’s expansion across 31 markets and to pay him his substantial special dividends.

It’s clear he pushed the Digicel IPO right to the wire this week before finally accepting that investors weren’t going to meet his ambitious valuation target of $13-$16 a share.

Failing to get it to market is a blow to his aura because market weakness or not, other IPOs managed to get away in New York this week.

In his CNBC interview yesterday, O’Brien said “we’ll come back”, possibly next year. But the narrative will undoubtedly have to change and maybe even some of the Digicel players fronting the offer.

As part of the IPO, O’Brien had planned to retain 94 per cent control of Digicel through special voting shares. Any comeback will probably require a change to that sweetheart arrangement. “We’ll come back to the market in time when the market conditions are right for our business,” he told CNBC, adding that the company had no urgent need for funding given its strong cash generation and lack of a major debt maturity until 2021. “We’re very comfortable.”

It sounded plausible but the forced grin suggested otherwise.