The 25-year old CEO of the anti-virus company, which now has its EMEA headquarters in Cork, had made his first million by age 19 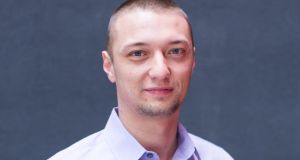 Marcin Kleczynski is a Silicon Valley start-up veteran. The self-confessed internet security fanatic created his first piece of anti-virus software at 14, set up his first company – Malwarebytes – at 18, and had made his first million by 19.

Last year he raised $30 million (€27 million) in venture capital funding for Malwarebytes. Today, he is opening the European, Middle Eastern and African (EMEA) headquarters of Malwarebytes in Cork, and he hasn’t even turned 26.

The Cork office of his cyber security firm will be headed by Anthony O’Mara, and aims to employ 50 people over the next three years. Already it has taken on 10 employees.

While Malwarebytes was founded in 2008, Marcin’s interest in malware dates back to 2003, when he accidentally downloaded a virus onto his parents’ computer.

He was browsing the internet for video games when the computer picked up a nasty malware infection, despite having a popular, paid antivirus in place.

“I downloaded a pirated video game and was playing it when the computer started acting weird. My mother threatened me saying I couldn’t use the computer anymore unless I fixed it.”

He spent three days searching the web and consulting with people on security forums on ways to remove the virus.

Through the process he learned two things: there was a lot of new malware out there and antivirus wasn’t up to scratch. He taught himself how to code and eventually engineered a small but highly effective anti-malware tool called Rogue Remover that quickly became popular in the security community.

Through this community, he got to know other like-minded security fanatics who traded malware information with him, and hated malicious code just as much as he did.

Through one of the forums he met veteran malware hunter and computer technician Bruce Harrison.

“At first I thought he was working for the bad guys, screwing with me. Then I realised he hated malware as much as I did. He worked in a computer repair shop.”

They teamed up, with Kleczynski spending as much as 12 hours a day working on the code, despite being a student at the University of Illinois and Harrison working on it at night, when he’d finished in the computer repair shop.

They spent a year tweaking and polishing the code, and launched Malwarebytes from Kleczynski’s college dorm room in January 2008.

“On the first day we launched we made $800 (€720),” Kleczynski says, putting it down to the fact that he and Harrison included people from the internet security community in the development process, who then all recommended the product upon its launch.

At this stage, Harrison and Kleczynski still had not met in person.

“We didn’t actually meet until we’d made our first million. We were in business a year before we even talked on the phone.”

Harrison is now the company’s vice president of research and he currently manages the global team of researchers from his home in Boston, while Kleczynski is chief executive.

“All of our research team is remote. Some we have never met in person. They work from home. Some of them have made significant enemies in the world, through exposing cybercrimes or malware threats, so they don’t like their identities known.”

Their anti-malware product had 100 million downloads in the first three years, all fuelled by word of mouth.

By 2013, it had more than 200 million downloads, and had removed five billion malware threats.

“My mother thought this was a college project for years,” says Kleczynski. “She only started taking it seriously when I pulled up at home in a nicer car than I used to have. It was a Mitsubishi 3000 GT. It looks like a mini Ferrari but is a hell of a lot cheaper,”

The software has since been translated into 36 languages, and has fixed more than 250 million computers – an average of six computers repaired every second. The company has just over 200 employees worldwide and 35 million unique users per month.

Malwarebytes comes in two versions: a free download that cleans consumer computers of malware as well as a professional version which offers real-time protection against malware, automated scanning, and automatic updating.

“Consumers who were using our product at home began telling their workplaces about it. We started getting more attention from businesses.”

Earlier this year, Kleczynski was named on Forbes magazine’s list of “30 under 30”.

He wants to keep building the company.

Despite having received several lucrative offers from large technology firms to buy it, Kleczynski believes the future of Malwarebytes is as a stand-alone entity with a clearly defined mission: defeating malware attacks.

“I have employees with options in the company,” he says. “They would probably like to see money some day.”