Rising price of the cryptocurrency, now worth four times as much as an ounce of gold 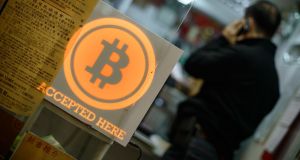 Bitcoin is now trading at $5,186 compared with $966 at the start of the year. The digital currency has soared 750 per cent in the past year, and is now worth four times as much as an ounce of gold.

But the price has been volatile.

Bitcoin plummeted below $3,000 in mid-September after Chinese authorities announced a crackdown on the digital currency. Beijing ordered cryptocurrency exchanges to stop trading and block new registrations, due to fears that increasing number of consumers piling into the market could prompt wider financial problems.

Using bitcoin allows people to bypass banks and traditional payment processes to pay for goods and services directly. Banks and other financial institutions have been concerned about bitcoin’s associations with money laundering and online crime.

The soaring value of bitcoin and other cryptocurrencies comes despite growing warnings over a price bubble.

The starkest warning came from JP Morgan boss Jamie Dimon, who said bitcoin was a fraud that will ultimately blow up. He said last month there was only a limited market for the digital currency, arguing it was only fit for use by drug dealers, murderers and people living in countries such as North Korea.

Kenneth Rogoff, professor of economics and public policy at Harvard University and a former IMF chief economist, has predicted that the technology behind cryptocurrencies will thrive but that the price of bitcoin will collapse.

Rogoff wrote in the Guardian this week: “It is folly to think that bitcoin will ever be allowed to supplant central-bank-issued money.

Despite the warnings, Japan’s government has implemented rules that recognise bitcoin as a payment method, and India and Sweden are considering their own virtual currencies.

Celebrities have also got involved, with the boxer Floyd Mayweather, the socialite Paris Hilton and the actor Jamie Foxx promoting coin offerings.

1 Passengers face queuing in car parks at Dublin Airport
2 Why is Germany suddenly embracing its inner Keynesian?
3 Domestic economy may get boost from multinationals
4 Major credit union plans to limit savings accounts to €40,000
5 Brother is dragging his heels as executor of uncle’s will - is there anything I can do?
Real news has value SUBSCRIBE