BionicGym: Now you can run a marathon on your sofa 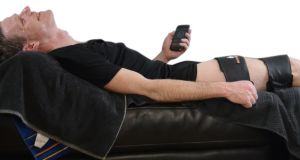 On your marks, get set . . . lie down: The device, crowdfunded through Indiegogo, has already been through several clinical trials, supported by Enterprise Ireland, Bio-Medical Research Ltd, Hull University and UCD.

For some people, exercise is a joy. Running is a stress release, a way to clear your head; cycling is something to be savoured; the gym is an adrenaline high. For the rest of us, it’s something we have to do because we have doctors’ warnings about obesity and heart disease ringing in our ears.

There’s a whole industry built around fitness and the various shortcuts that you can (allegedly) take to get there. It seems like every month there’s a new way to do it too – high-intensity interval training, cross-fit, fartlek, TRX – and it can be daunting for the uninitiated.

But what if someone told you you could get in the calorie-burning quivalent of running a marathon by lying on your sofa? And that it could all be down to shivering? It may seem like it’s too good to be true, but the people behind it insist the science is sound.

BionicGym is the brainchild of Louis Crowe. It’s based on the idea that shivering is nature’s way of burning calories without you having to do anything. BionicGym stimulates that reaction, but at a deeper level and a higher intensity, causing the user to become breathless, to sweat and for the heart rate to increase.

It straps to your thighs, and is thin enough to be worn under clothes without too much bulk, and it can be taken travelling too. The intensity of the session is controlled via an Android or iOS smartphone, allowing you to go from a brisk walk to a speedy run at a few taps.

“We shiver to burn calories without doing anything. This is how nature has evolved. We thought if we could hack this process, we would be able to burn calories without actually doing anything, as in without as running or any huge gross movements. There’s a resonant or ‘magic’ frequency that allows us to do this – that’s the shivering frequency, which tends to be around 7-8Hz,” he explains. “Energy is consumed not in the contraction of muscle fibres or tension generated, but in the relaxation or lengthening of them. We found a way to shorten and lengthen those fibres that optimises enough energy per muscle fibre. If you can bring in enough muscle fibres, we can put enough systemic demand on the body such that there is a huge call-out for oxygen. The heart has to beat quicker to deliver all this blood to the muscles, you breathe deeper and produce carbon dioxide and you need more oxygen. You’re sweating because of the heat generated.”

That produces a cardiovascular training effect on your body.

When we meet, he demonstrates the device on himself, worn under his suit. The only obvious indication that he’s even using it at first is that his leg is shaking slightly. If you weren’t aware that he was using the BionicGym, you might just pass it off as a nervous habit.

BionicGym isn’t an easy, quick fix. It may seem like that if you’d rather sit through your entire Leaving Cert honours level Irish course in one go than get out and pound the pavement on a dark winter night, but having seen it demonstrated, it certainly isn’t a relaxing thing.

Yes, you can lie back on your sofa. But you could end up sweating as much as if you were doing a full gym class – it’s just in the privacy of your own home.

The device has already been through several clinical trials to prove its effectiveness, supported by Enterprise Ireland, Bio-Medical Research Ltd, Hull University and University College Dublin. It’s even been tested in zero gravity with the European Space Agency.

An Indiegogo crowdfunding campaign opened on November 15th and, within a day, it had surpassed its funding requirement. As of the time of writing, it has been backed by 246 people, raising more than $85,000. Originally, it set out to raise $20,000, so it is now 425 per cent funded, with a month left to run.

“It’s very humbling that people will put their trust and expectations in us,” Dr Crowe says.

If all goes to plan, backers will be able to spend next winter on their sofa keeping their fitness levels up rather than braving the Irish winter.

The advantages extend to more than just to those among us looking for a convenient option. With some modifications, BionicGym has been used with patients suffering from spinal cord injuries to help strengthen their muscles.

It also could work for those with arthritis and mobility problems caused by chronic conditions such as diabetes.

However, if you do plan on using it to train for next year’s marathon, Dr Crowe warns you still need to do test runs to make sure your training is where it should be – maybe a run a week to mark your progress. The idea is that it complements, rather than completely replaces, the need for physical exercise, which brings other benefits than simply a lower heart rate.