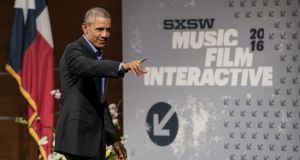 US president Barack Obama at the South by Southwest (SXSW) Interactive festival: “I don’t recall the phrase being, ‘Yes I Can’. It’s ‘Yes We Can’.” Photograph: David Paul Morris/Bloomberg

When the rain started pouring on the first day of this year’s South by Southwest (SXSW) Interactive festival, it was clear most of the Irish entourage – and everyone else – had not packed for such weather. This reporter has learned a lesson: there’s nothing more depressing than the sight of a red-faced Irishman in shorts and a Hawaiian shirt standing in the rain holding a cocktail.

But SXSW is the Donald Trump of festivals. Its momentum cannot be stopped by poor weather or anything else. And, like The Donald, while almost everyone you meet wants to highlight everything that is wrong with the festival, it still commands huge support.

US president Barack Obama and first lady Michelle spoke at separate events, the first time a sitting US president has attended. He was only following in Irish footsteps, of course. Taoiseach Enda Kenny set a precedent last year as the highest-ranking politician to ever come to SXSW. His aim was to establish more economic ties between Austin and Ireland.

“Government isn’t trusted. When we try to encourage folks to fix these problems, it comes off as propaganda. If we work with private enterprise to overcome challenges affecting us all, however, we’re more likely to achieve our aims,” he said.

It had been made clear that Obama wouldn’t – or couldn’t – discuss the dispute between Apple and the NSA for legal reasons, but Texas Tribune editor Evan Smith still got a question in. Responding first with a qualification that he was in the “civil liberties” camp on any debate over privacy versus security, Obama questioned why we perceive access to data to be so different from other privacy invasions, such as search warrants for the homes of suspected child pornographers or those plotting terrorist attacks.

Time had run out, however, before anyone could stress the obvious distinctions between police physically coming in to someone’s home to search for evidence of wrongdoing and the more secretive analysis of private data that could take place if governments were given the legal footing to do so.

Obama stole the show on the opening day, but his keynote was quickly forgotten once the tech crowd’s short attention span was distracted by the thousands of other events taking place. Too much choice isn’t always a good thing. It’s difficult not to get stuck in a “grass is always greener” mentality at SXSW where there are dozens of things worth doing all happening simultaneously.

Professor Hiroshi Ishiguro, director of the Intelligent Robotics Laboratory at Osaka University in Japan, used the event to showcase his many creations, including a creepy robot which is his exact double.

Convincing communication exchange between robots and humans remains a challenge. Ishiguro’s newest prototypes, named CommU and Sota, demonstrate how people are more likely to react differently when speaking with more than one robot, particularly if the robots are also talking to each other.

According to Ishiguro, this perceived group dynamic leads humans to make more of an effort to adapt their manner in order to help a robot understand, thus making for more realistic conversation.

In a panel discussion entitled Developing News Leadership for the New Normal, editors from the LA Times, the Atlantic and NBC News discussed the qualities that make a good editor in the modern media age. All agreed that we have two ears and one mouth for a reason and, therefore, any successful editor in the 21st century must be, above all else, a good listener. Yeah right!

Ireland Inc has plenty to smile about after SXSW Interactive. The decision to bring street performance group Macnas along with the usual Irish entourage, was an inspired choice. Its performance on Sixth Street in downtown Austin was a first for the event and drew a huge crowd.

While SXSW Interactive is over, things are just warming up for the Music and Film festivals. As the event continues to grow, so too does the number of people harping on about some ideal past when the festival was “less commercial”. They may have a point, but there are still worse ways to spend a fortnight.