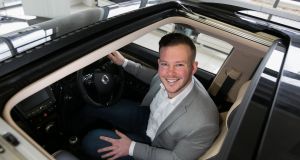 Fleet, a Co Wicklow-based start-up seeking to bring widespread disruption to the car rental market, has turned to a new Irish equity crowdfunding provider to raise €275,000 to expand its team and bring software development in-house.

The start-up has developed a peer-to-peer software platform that allows motorists to earn extra money by hiring out their private cars when they are not using them.

It currently has about 2,850 monthly users and is seeking to be to car rental what Airbnb is to holiday accommodation.

It is now going live with a fundraising campaign on the Spark crowdfunding platform to secure investment through the sale of 20 per cent equity in the business.

Spark, which is officially launching this week after quietly going live earlier this year, has already helped three businesses to raise a combined €130,000. Founded by Chris Burge, an engineer and owner of the professional energy services consultancy Bravo Energy, Spark allows small and medium-sized investors to purchase shares in early-stage companies.

“The Fleet business model and technology is highly scalable and we know this is the type of business that appeals to investors. Fleet owns its own platform and we believe the company is well positioned to benefit from strong end-market fundamentals in the growing sharing economy and peer-to-peer marketplace,” said Mr Burge.

Mr Sheehy told The Irish Times the company saw the crowdfunding campaign as both an opportunity to raise finance and to publicise the company.

“The most appealing thing about crowdfunding is that not only does it bring in new investors but that they are then essentially brand ambassadors for the company. Obviously, getting the word out about what we do at Fleet and how people can earn money from their cars is critical to our success, so I think the campaign will help with this,” he said.

Using the Fleet app, users can arrange deals with car owners for the private rental of vehicles. Prices vary according to vehicle types. Insurance is provided via a deal the company has with Axa.

Fleet secured €210,000 in investment from family and friends prior to its launch and Mr Sheehy has also invested in the business. The businessman said he had also talked with KPMG for a seed round of about €1 million but had been keen to try crowdfunding.

He said the company would likely seek additional funding at a later stage, adding that he primarily sees growth coming through licensing its platform.

“We’re in early-stage discussions right now with a few potential licensees, one of whom is in the Philippines and another in the Czech Republic and I think licensing is the quickest way for us to scale.”

Mr Burge said he was moved to establish Spark after previously making a number of investments. The business, which has been self-funded to date, is a rival to platforms such as Crowdcube, a UK-based equity crowdfunding provider that has been used by the likes of HouseMyDog to raise funds.

He stressed that while some existing Irish websites such as Linked Finance, Grid Finance and Flender also enable investors to lend to early-stage businesses, Spark allows them to become actual shareholders in companies they believe in.

“They provide debt structures around investments, but what we offer investors is the opportunity to buy equity in a business and that is a very big differentiator,” said Mr Burge.