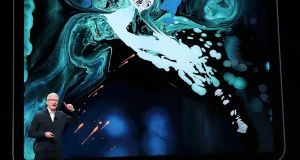 Apple has made the biggest updates to the iPad since its tablet was first introduced in 2010, adding facial recognition cameras and packing a larger screen into a smaller overall casing.

The two new iPad Pros signal the death of the physical “home button”, first introduced with the original iPhone in 2007, across all of Apple’s latest iOS devices. Only the entry-level iPads, last given an update earlier this year, now feature the familiar circular button, which was replaced by touchscreen swipes and gestures across all of this year’s iPhones.

The iPads were introduced alongside new Macs at a productivity-focused launch event in New York.

The new iPad Pro mimics the iPhone X’s techniques of using a Face ID camera and thinner bezels to stretch its display closer to the edges of the device.

Critics of the previous 12.9-inch iPad, first released three years ago, had said that it was too large to hold comfortably. Apple is hoping to address that with the new slimmer design, which has 25 per cent less volume overall than its predecessor. The iPad is roughly the same size as US letter paper, which is 8.5 x 11 inches, and weighs “about a pound”, Apple said.

The iPad Pro uses the same LCD-based “Liquid Retina” display as the iPhone XR, which went on sale last week, rather than the richer and more expensive OLED screens employed on the iPhone XS.

The new iPads swap Apple’s proprietary Lightning connector for the industry-standard USB-C, allowing it to connect to accessories such as cameras or an external display, while also ditching the analogue headphone socket in the process.

A new Apple Pencil attaches magnetically to the side of the iPad Pro, charging and pairing wirelessly for the first time. Apple has also updated the keyboard case that attaches to its tablet. The two accessories help to make the iPad a fuller competitor to both standard laptops and so-called “convertibles” such as Microsoft’s Surface. They are also slightly more expensive than their predecessors, at $129 for the Pencil and $179 for the keyboard case.

Inside the new iPad Pro is an A12X Bionic chip, a more powerful version of Apple’s custom silicon found in the iPhone XS. The 7-nanometer chip brings Apple’s “neural engine” processing to the iPad for the first time, allowing more sophisticated apps such as Adobe’s Photoshop.

Apple also released long-awaited updates to its entry-level Macs – but it is making the cost of its cheapest laptops and desktop computers higher too.

The product introductions in Brooklyn on Tuesday morning came as Apple said it had reached 100m active Mac users, out of an overall 1.3bn Apple devices that the company said were in use earlier this year.

The latest model features a high-definition 13.3-inch Retina display and thinner bezels that reduce the notebook’s overall volume by 17 per cent. Apple has added a TouchID fingerprint reader for simpler login and Apple Pay, alongside an improved keyboard.

The MacBook Air’s casing is built entirely from recycled aluminium, in the latest example of Apple’s attempt to reduce the environmental footprint of its products.

The new MacBook costs upwards of $1,199, depending on configuration, compared with the previous price of $999.

At the same time, Apple updated its niche Mac mini, which starts at $799 — up from $499 for the older model. The standalone computer, which does not come with a monitor, was last given a significant overhaul in 2010.

The Mac price increases follow a similar strategy that Apple has taken with the iPhone, which now costs as much as $1,100 for the new iPhone XS Max, and the Apple Watch. Apple is relying on average selling prices to increase its revenues even if unit sales are flat or declining.

“These new Macs are going to help our customers be even more productive and even more creative,” said Cook. – Copyright The Financial Times Limited 2018