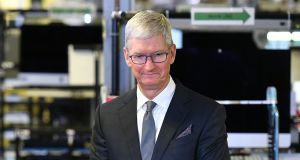 The iPhone-maker is rolling out new privacy features that restrict how mobile apps, such as those from Facebook and Google, gather data about users to target ads.

“If a business is built on misleading users, on data exploitation, on choices that are not choices at all, then it doesn’t deserve our praise, it deserves reform,” Mr Cook said on Thursday at an online Computers, Privacy and Data Protection conference.

Without naming specific businesses, Mr Cook criticised companies’ algorithms for perpetuating the spread of disinformation and conspiracy theories for the sake of user engagement. He warned that such systems have the power to degrade social fabric.

“It is long past time to stop pretending that this approach doesn’t come with a cost of polarisation, of lost trust and, yes, of violence,” Mr Cook said, alluding to the recent attacks at the United States Capitol.

The Apple chief executive also reiterated calls for a US privacy law much like the European Union’s General Data Protection Regulation.

He said it was time for worldwide laws and new international agreements that “enshrine the principle of data-minimisation, user-knowledge and data-security around the globe.”

Following an update to Apple’s iPhone and iPad operating system software this spring, users will be prompted to explicitly permit or deny developers the ability to track their data across apps or websites.

It is expected many consumers will choose not to allow this, making it harder for apps to show users ads based on their past online activity, drawing the ire of Facebook and other advertising companies that rely on such abilities.

In full-page newspaper ads in December the social network attacked Apple over the plans, saying the features would hurt small businesses, and on Wednesday Facebook told analysts the iOS changes could curb its revenue growth.

A group of French online advertisers filed an antitrust complaint against Apple last autumn, warning publishers’ ad revenue could plunge by as much as 50 per cent as result of the update.

Apple says the features will give users more transparency about how their data is used, and in a way that still enables advertising. – Bloomberg