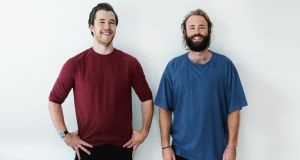 Peter O Malley and Galen Lowney. They founded Advisable.com in 2017

The company, which uses technology developed in-house to match companies with freelance marketing specialists, was founded by Peter O’Malley and Galen Lowney in 2017. Mr O’Malley is a former employee of the Web Summit, and also worked with retail technology firm Pointy. com. Mr Lowney worked in M&A for Paddy Power, and also as a strategy consultant for Boston Consulting Group.

The funding round was led by Frontline Ventures, with Mr Cosgrave and Mr Corcoran among a group of angel investors that also included CPL’s Anne Herarty, Handy. com’s Oisin Hanrahan, and the cofounder of Pointy.com Mark Cummins.

Mr Lowney said the money would be used to help grow its team.

Mr O’Malley said: “We’re building the tools to help companies find, hire and manage independent workers more efficiently while getting the world’s best freelance talent matched with jobs that utilise their skill sets more frequently. The freelancer revolution benefits everyone, and we want to accelerate it.”

The company, which has worked with companies from SAP and Avery Dennison, to start-ups such as TravelPerk and Babbel, has independent workers in 53 countries on its system.

“Great talent is the ultimate advantage any company can have,” said Will Prendergast, general partner at Frontline Ventures. “Advisable is enabling companies to access the very best freelancers as and when they need them. Democratising access to this premium talent is a huge opportunity.”