‘Mark Zuckerberg, for one, has promised/threatened a new generation of chatbots operating inside the Facebook Messenger app’ 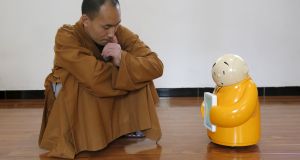 Master Xianfan looks at robot monk Xian’er as he demonstrates the robot’s conversation function during a photo opportunity in Longquan Buddhist temple on the outskirts of Beijing recently. Photograph: Kim Kyung-Hoon/Reuters

A month ago the world met Tay, an alien intelligence come to walk among us and learn about life on Earth as it interacted with humans. Within 15 hours, however, Tay had been corrupted, its innocence manipulated and turned bad by cynical humans, its cheery optimism replaced with racist hatred.

Tay, it quickly became clear, was not ready for the harsh realities of this world; and in truth, the world was not ready to accept this new species among us.

Tay, of course, was Microsoft’s disastrous experiment in creating a chatbot, a programme designed to interact in a realistically conversational manner with actual humans through the power of artificial intelligence. Microsoft’s exercise in linguistic machine learning would see Tay interact with millennials on Twitter and other messaging apps, learning and developing as it went along.

That people couldn’t resist the urge to turn Tay into a Hitler-supporting racist probably says more about us than it does about the state of artificial intelligence. Still, the whole exercise was such a calamity you might think the march of the chatbot would be paused for a while to work out the kinks in the concept and the technology.

And yet, in the weeks after Tay’s ignominious departure from the world, the fervour surrounding chatbots has only increased, with both Facebook and, yes, Microsoft putting chatbots at the centre of their respective developer conferences.

“I’ve never met anyone who likes calling a business,” Zuckerberg told the crowd, promising that the bots could help you “message a business in the same way you’d message a friend”.

At Microsoft’s Build Developer Conference, meanwhile, chief executive Satya Nadella the gathered that “bots are the new apps”. A commonly cited example of how chatbots could replace apps is by ordering an Uber through your messaging app rather than by opening the Uber app. If that interaction becomes common enough, the need for a great many apps disappears.

Earlier this year, business news site Quartz launched its own innovative app, offering snippets of stories in a UI resembling Apple’s iMessage, complete with quivering ellipses as the story is being updated. Though gimmicky, it hints at how messaging apps can become more advanced platforms.

Bots by other names

Chatbots are far from new. Siri and Google Now are basically chatbots, after all, and there were bots in IRC chatrooms before the web was even a thing. In Asia, the major messaging apps have developed into platforms in their own right. WeChat, LINE and Kakao, rather than mere WhatsApp alternatives, are feature-rich platforms with a wealth of functionality.

The race to replicate that model in the West is very much on, and as Chris Horn pointed out in this space last week: “Whichever company dominates the provision of an automated concierge may well be the next Google.”

But forget for a moment Zuckerberg’s implication that calling a business or opening an app is an onerous obligation that humanity can no longer tolerate. In gauging the actual potential of these chatbots to usurp the world of apps, remember that it is very much in the interests of Facebook and Microsoft to usher in a post-app era.

As analyst Jan Dawson put it: “Facebook and Microsoft have strong incentives to pursue the bot vision. Both companies failed to make a meaningful dent in the mobile operating system battle and, as such, find themselves in secondary roles as makers of apps that run on other people’s platforms.”

The initial hurdles include not just the inadequacy of the current linguistic limitations of chatbots, but also what might be termed context contagion. If we use a certain channel, such as Facebook Messenger, to communicate with friends, we will probably not appreciate it when all of a sudden that communication channel becomes contaminated with messages from brands demanding our interaction, no matter how finely attuned they may be to our range of interests.

After all, Facebook has a habit of encroaching on its users’ sense of personal space, so to speak, and chatbots have the potential to exacerbate that. If our initial interactions with these chatbots is unsatisfying or frustrating, the bot momentum might be stymied somewhat.

The discussion about chatbots has, up to now, largely focused on the natural language capability of the AI. At some point in the future, however, mimicking natural language will be a solved problem. At that point, we may very well look back and marvel at the rudimentary interactions of current chatbots.

Will we, I wonder, be nostalgic for the days when it was easy to tell whether we were interacting with a machine or talking to a human?