‘Amazon has been an inspiration to me personally’ – Deliveroo founder 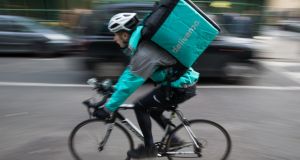 Deliveroo was founded in 2013 by Will Shu, a former investment banker. Photograph: AFP

Amazon has led a $575 million (€515 million) funding round into Deliveroo, making the investment after talks between the London-based food delivery app and Uber broke down last year.

Deliveroo said on Friday that Amazon was the biggest investor in the funding round, which also saw it raise money from existing investors T Rowe Price, Fidelity and Greenoaks.

The deal comes after Amazon last year shut down its own food delivery service, Amazon Restaurants, in the UK.

The investment will help Deliveroo compete with Uber’s delivery service, Uber Eats, and UK-listed Just Eat. The three are locked in a fierce battle for market share.

Deliveroo said in a statement it would “invest heavily” in its technology team in London to build new products while Will Shu, founder and chief executive, said it would use the money to grow and offer more choice to its customers.

“Amazon has been an inspiration to me personally and to the company, and we look forward to working with such a customer-obsessed organisation,” he added.

Deliveroo, which was founded in 2013 by Mr Shu, a former investment banker, was valued at $2 billion in a funding round two years ago and was seeking a valuation as high as $4 billion in its talks with Uber last year. It did not disclose a valuation for the latest funding round on Friday.

As one of the first companies to build a takeaway app that uses its own couriers, rather than relying on restaurants to deliver food themselves, Deliveroo has been seen as one of the more innovative businesses in the sector.

It was also the first to launch bricks-and-mortar kitchens, or “dark kitchens”, where several restaurants cook food for delivery. The model has since been copied by its rivals.

“We’re impressed with Deliveroo’s approach,” said Doug Gurr, Amazon’s UK country manager. “Will and his team have built an innovative technology and service, and we’re excited to see what they do next.”

Deliveroo more than doubled its revenues in 2017, the most recent year for which financial information is available, but has also increased its operating expenses and posted losses of almost £185 million that year, compared with £129 million in 2016.

The company now operates in 14 countries and more than 500 cities, with around 60,000 couriers on the platform. – Copyright The Financial Times Limited 2019