Sals at US stores open at least a year up 0.6%, positive for the sixth consecutive quarter 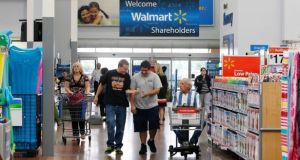 Walmart reported a decline in quarterly earnings that was in line with expectations on Thursday as it booked a modest increase in sales at existing stores.

Analysts on average had expected $1.43 per share, according to Thomson Reuters I/B/E/S.

Walmart said sales at US stores open at least a year rose 0.6 per cent, positive for the sixth consecutive quarter.