Company looking at establishing fourth US office by 2020 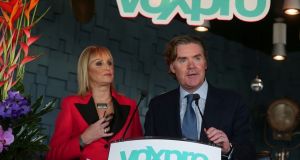 Voxpro founders Dan and Linda Kiely at the opening of their Dublin offices.

“I started my business with my wife in Cork with six people and we’re going to scale to 5,000 people this year,” Mr Kiely told the event.

Dan Kiely, along with his wife Linda, sold the cork-based business in 2017 to Canadian group Telus International with industry insiders at the time suggesting the deal was worth close to €150 million.

Aside from Cork, the company has offices in Dublin, San Francisco and Folsom, both in California, Athens, Georgia, Bucharest, Romania and Manila in the Philippines.

Mr Kiely said on Thursday the company is looking at establishing a fourth US office by 2020. He noted that while the company is recruiting staff to work in Ireland from continental Europe, he said the capital’s “shortage of accommodation is a real problem for Ireland Inc.”

“There’s an onus on business leaders to get together and talk to government about how we can solve this problem. It’s coming up with the solution that’s going to be critical to Ireland’s future.”

Voxpro had previously mooted the idea of an IPO before being sold to Telus. Before being sold the Kielys intended to go public once revenues hit €100 million. The company’s latest accounts for 2017 show it recorded sales growth of 50 per cent in the year with revenues hitting €91.1 million.

The company recently said it was creating 400 jobs in Cork across a number of areas including management, training, tech support, customer experience operations, sales trust and safety and finance.