Volunteering at festivals: Is there any such thing as a free ticket?

If you’re volunteering at Electric Picnic, MoneyConf and Body & Soul you might wonder would you be better off just paying for your ticket, rather than paying for it with your time 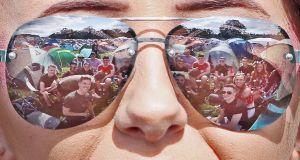 It’s attractive for many to give up their time to work for free at a festival or event that they want to attend. In return, they get a free ticket. For the organisers, the benefits are obvious – a fleet of willing workers at negligible cost.

However, is there a danger that event and festival organisers, many of whom run such events for a profit, are crossing a line between altruism with a perk, and taking advantage of an eager horde of typically young people prepared to work for a free ticket?

How does it work

Volunteering has become a standard way of boosting a festival or event’s workforce at a low cost right across the world. In Ireland, festivals and cultural events such as the Tall Ships, Open House and Culture Night have embraced the move, allowing them to scale up their events on the back of volunteers.

But it’s not just not-for-profit organisers that are benefiting from the trend. Commercial event organisers, ranging from Body & Soul and Longitude to Electric Picnic, as well as the recent MoneyConf, an offshoot of Web Summit, use volunteers, sometimes as many as a couple of hundred, to run their events.

At the Electric Picnic, for example, a spokeswoman said that the Stradbally music festival will have between 200 and 300 volunteers on site this September. Applications to volunteer went live in March. The organisers promise volunteers “time out to enjoy the festival when work is complete”.

At June’s MoneyConf, Paddy Cosgrave’s fintech offshoot of the Web Summit, which attracted more than 5,000 people, some 115 people volunteered. The application process for MoneyConf 2019 is already open, according to a spokesman.

Event organisers typically offer a free ticket in exchange for people’s time and commitment to working at the events. Volunteers may also get discount travel. Body & Soul, for example, offers a return bus ticket from Dublin city centre to the festival site in Co Westmeath for €10, free access to the crew car park and campsite, snacks and tea/coffee, “a phone charging station” and “volunteer support staff”.

At MoneyConf, in addition to a ticket to the three-day event, which can cost about €995, volunteers received a “lunch pack”. For many volunteers though, working at the event cost more than their time as the organisers ruled out contributing to travel or accommodation costs.

Regardless of the package, for volunteers, the biggest perk is a free ticket to an event they may otherwise have been unable to attend.

“We get a lot of students, who possibly can’t afford to buy a ticket. This way, they can come and hopefully enjoy it. So once they start working, they can come as a music fan for years to come, ” said the spokeswoman for Electric Picnic.

A spokesman for MoneyConf said the event attracts volunteers from all over the world, with some travelling from as far afield as Argentina, Hong Kong and Portugal.

“Volunteering gives people the chance to learn new skills, as well as experiencing the magic of a Web Summit event with an insider’s perspective,” said the spokesman, adding that a further advantage is the “connections” volunteers can make with tech and media industry leaders.

For organisers, it’s a way of bumping up their workforce without having to pay for it. And while it could be argued that they are giving up tickets they might have otherwise been able to sell, this isn’t always the case.

As a spokeswoman for the Electric Picnic said, once the event reaches capacity, it can’t sell more tickets. So there is no cost in giving “tickets” to volunteers for free. Health and safety constraints means that it wouldn’t be able to sell these tickets anyway.

The list of tasks assigned to volunteers can be vast. At this summer’s Body & Soul festival, volunteers were needed to work as sign writers, carpenters, receptionists, to staff the Soul Kids area, or to act as a general steward.

At Electric Picnic, volunteers are the “eyes and ears of the festival”, acting as roaming stewards and helping festival goers with directions and information on the event.

At MoneyConf, volunteers worked across a range of roles, including operations, registration, social media live teams and “many more”.

Typically, volunteers will be expected to dedicate a certain portion of their time to working on these roles as part of the free ticket agreement. At Body & Soul, for example, volunteers must commit to 18 hours work, broken down into three six-hour shifts; while at Electric Picnic, which runs over three days, you must work for 24 hours, split either into four six-hour shifts, or three eight-hour shifts.

Volunteers at MoneyConf are expected to work either two shifts across the event, of about five to six hours each time, or one shift of up to nine hours.

Of course by using volunteers rather than paid employees, festival organisers run the risk of bringing a fleet of volunteers on-site who abuse the system; either disappearing into the ether once they hit the site, or who, by signing in and out, can give the impression of “working” but may really be just lounging around.

To counter this, many events now require “volunteers” to pay a “bond” to get their place at the festival. They argue this roots out the real volunteers from those just looking for a free pass. But the charges are not insignificant.

At Electric Picnic for example, you’ll be required to pay €250 up front – more than the cost of a ticket – and this will only be refunded two to three weeks after the event “if shifts are completed satisfactorily”. If they’re not, the bond will be retained, and the volunteer will lose out. According to a festival spokeswoman, about 10-15 bonds are retained each year.

At Body & Soul, volunteers must buy a ticket, which starts at €169, as a deposit. “After the festival, when we have ensured that you have completed all shifts allocated to you, you will be refunded the cost of the ticket,” the organisers say.

MoneyConf doesn’t require volunteers to buy a ticket first, but it does warn that “if you fail to complete, arrive late or leave early for either of your volunteer shifts, you will no longer be entitled to attend MoneyConf”.

There’s no doubt that offering free tickets in exchange for work has been welcomed by large swathes of people; otherwise festival organisers wouldn’t bother using the facility.

However, it does beg the question as to why festivals, which are being run as commercial events, simply don’t pay people to work at them.

After all, live music behemoth Festival Republic is behind the Electric Picnic, and abridged accounts for the festival, show that the EP Republic Ltd had a cash pile of almost €4 million in 2016.

In the US, a number of years ago, a group of volunteers brought a class action lawsuit against festival organisers Live Nation and its event partner Insomniac Events, claiming that they weren’t adequately compensated for their efforts.

There is also potentially scope for commercial operators to abuse the system. At the recent Vantastival festival in Co Louth for example, an ad was placed on Gumtree looking for volunteers to work for 24 hours “in two busy food units” over the three-day festival, thus saving the entry costs of up to €120.

But if the operator of the food unit had paid even the minimum wage of €9.95 an hour, the workers would have been entitled to €238.80 for their 24 hours work – well in excess of the cost of an entry ticket.

Another potential issue is the length of time volunteers must commit to the festival; yes they may only have to work up to 24 hours, but they are typically required to be on site for a much longer period.

At Electric Picnic, volunteers must be on site by noon on Thursday, August 30th, and available for an on-site briefing at 4pm – even though “shifts” won’t start until the following day.

If you are in paid employment, this is an extra day of potential earnings you must forgo to attend the festival. Not only that, but volunteers must also be prepared to stay until the end of the festival on Monday, September 3rd. Essentially they must give up five days of their time for a free weekend pass.

So while the lure of a free ticket may undoubtedly be attractive, it may be no harm to consider if you would simply be better off paying for entry, rather than paying for it with your time.

Want to volunteer at Electric Picnic?

The rules - volunteers must not:

– Get angry or frustrated.

– Watch the entertainment when on shift.

– Exceed your powers: you are volunteering in a helping capacity.

– Drink alcohol or take drugs prior to or during your shift. If you are found unable to work due to alcohol or drug consumption, you will be immediately ejected from the site and your bond will be forfeit.

– Smoke while on shift. If you wish to smoke while on break, please ensure your volunteer highviz vest is not visible.