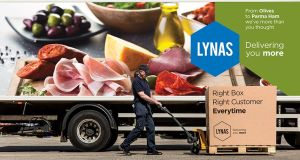 Lynas Foodservice: increased its workforce to 490 during 2017.

Lynas Foodservice, one of the island’s largest food distributors, has reported a jump of more than £15 million (€16.85 million) in turnover to a record £131.5 million.

The Coleraine-headquartered company, which makes over 8,000 deliveries every week throughout Ireland and Scotland, is one of the North’s most successful family-owned businesses.

Its latest accounts show that although the company significantly grew its turnover in the 12 months to October 2017, its pretax profits performance did not follow suit and remained similar to 2016 at £2.7 million.

In their strategic report in the accounts, the directors of the company, which began life in 1945 as a small fishmongers shop in Coleraine, said they considered the 2017 results to be “satisfactory”.

One of the highlights for the Lynas company last year was its expansion into the Scottish market.

Its latest set of financial results show it increased its workforce to 490 people during 2017 which in turn propelled its annual wage bill to more than £13.5 million.

The third-generation business, which remains under the control of the Lynas family, delivers frozen, chilled and ambient products to more than 5,000 customers every week.

It currently supplies some of the island’s top hotels and restaurants but its wide client base also includes coffee shops and many local fast-food takeaways.

Last month it announced it had won a contract to also supply the new €233 million Center Parcs Longford Forest development which is due to open next year.

Like many other business leaders in the North, Andrew Lynas, one of the company’s directors, has voiced his opinion that a soft Brexit would be the best result for firms in Northern Ireland.