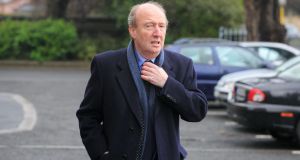 Drivers may face fines if they fail to notify the Road Safety Authority when they change address so the details on their driver’s licence can be updated, according to Minister for Transport Shane Ross.

There is currently no legal requirement for holders of a Republic of Ireland driving licence to inform the authorities when they change address.

By contrast, in Northern Ireland a driver potentially faces a fine of up to £1,000 (€1,150) if they fail to immediately inform the Driver & Vehicle Agency (DVA) of a change of address or name. The DVA issues a new licence free of charge for address changes.

Mr Ross said he would consider “making it mandatory for drivers to advise the RSA of a change of address in the context of future road traffic legislation”.

The Minister was responding to a parliamentary question from Independents4Change TD Tommy Broughan who had raised the question in the context of a high proportion of court summons for road traffic offences not being served.

A possible reason for this low rate of serving summons is incorrect data on a driver’s name or address.

In 2008, as part of the project to harmonise the penalty point systems in the Republic and the North, the British department of transport published a report which claimed only 30 per cent of address data held on the National Driver File (NDF) in Shannon was accurate.

The Department of Transport has always disputed this figure and says the quality of the data held by the NDF is fit for purpose.

It also points out that 75 per cent of fixed charge notices issued in the Republic result in the driver accepting the points on to their licence.

‘This is war’: Irish health workers on their Covid-19 crises
5

Fish and chips: How to cook them just like the chipper does
6