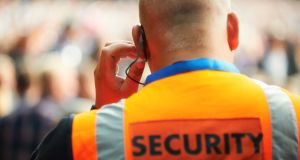 As well as providing a cash in transit service BMSS also supplied security personnel to Shell, during the construction of a highly controversial gas pipeline and refinery at Bellanaboy, Co Mayo, some years ago. Photograph: Getty Images

A criminal investigation is being conducted into a company that provided cash in transit and other security services and which has an estimated deficit in its client account of €1.8 million, the High Court has heard.

The Garda investigation concerns the affairs of Business Mobile Security Services Ltd (BMSS), the holding company of Senaca. As well as providing a cash in transit service it also supplied security personnel to Shell, during the construction of a highly controversial gas pipeline and refinery at Bellanaboy, Co Mayo some years ago.

Last month experienced insolvency practitioner Mr Joe Walsh of JW Accountants was appointed as provisional liquidator of the company, which sought to be wound up due to cash flow difficulties.

The matter returned before Mr Justice Senan Allen at a vacation sitting of the High Court on Thursday, who confirmed Mr Walsh as the official liquidator after being satisfied that the company is “grossly insolvent”.

The liquidator claims that clients’ money had been used to fund the company, counsel said.

Mr Brady said that 68 customers have made contact with the provisional liquidator seeking to have their cash returned to them. The claims from those customers regarding monies in the client or treasury account total €2.7 million, counsel said. The Revenue Commissioners are owed over €670,000 by the company, Mr Brady said.

Other clients of the company who claim they are owed money include the Irish Society of Prevention of Cruelty to Children and Horse Racing Ireland. Lawyers acting for the various creditors have entered submissions on how their claims should be treated by the liquidator, the court heard.

Ross Gorman, counsel for the company, said its chief operations manager, Jim Farrell, had admitted that clients’ monies had been used to shore up the company and that he had apologised for that.

Judge Allen heard there was now a criminal investigation following complaints to the Garda into the company’s affairs. The liquidator had asked for an explanation from the company’s former directors, Jim Farrell and his wife Grainne Farrell, about three payments totalling €62,000 out of the company shortly before it sought to go into liquidation. Mr Walsh seeks to have the Farrells examined before the court about payments out.

Mr Farrell who was present at court was given a month by the judge to provide a sworn statement in regards to payments. Mr Justice Allen adjourned the matter to a date in October.