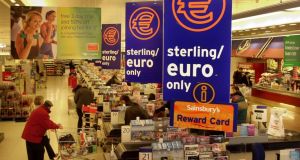 According to the most recent industry data, Sainsbury’s has seen the weakest trading among Britain’s big four grocers.

The firm said on Wednesday retail like-for-like sales, excluding fuel, rose 0.2 per cent in the 16 weeks to June 30th, its fiscal first quarter.

That was ahead of analysts’ average forecast for a fall of 0.1 per cent but below growth of 0.9 per cent in the previous quarter.

“The headline numbers reflect the level of price reductions we have made in key areas like fresh meat, fruit and vegetables since March,” said chief executive Mike Coupe.

“Our price position has improved and customers have responded well, resulting in a continuation of the improved volume trend we saw in the second half of last financial year.”

According to the most recent industry data and company updates Sainsbury’s has seen the weakest trading among Britain’s big four grocers, which also includes market leader Tesco and number four Morrisons.

Shares in Sainsbury’s have risen 32 per cent so far this year on the back of deal to buy Walmart owned Asda, which is currently being probed by Britain’s regulator, the Competition and Markets Authority (CMA).

The deal would see the combined group overtake Tesco as Britain’s biggest grocer.

The CMA’s probe is expected to be lengthy and Sainsbury’s does not anticipate the deal being concluded until he second half of 2019.

Sainsbury’s said on Wednesday it has agreed a financing package of £3.5 billion for the deal.

“The market remains competitive. However, we have the right strategy in place and our proposal to combine Sainsbury’s and Asda will create a dynamic new player in UK retail,” said Coupe. - Reuters