Reasons to be cheerful – and fearful – about Northern Ireland’s economy 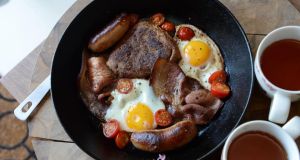 There is no better illustration of what is really going on in the local economy than the price of an Ulster fry. Photograph: Cyril Byrne/The Irish Times

In theory, life or at least the economy is beginning to look a little bit better in Northern Ireland than it has been for a while.

There are more people in work – by latest government estimates about 808,000 and house prices are beginning to show some signs of recovery. Figures published this week by the University of Ulster suggest there were more houses sold in the North in the three months to September than at any other time in the last six years.

There is also evidence that at least one endangered local species – car dealers – may have a reprieve as new car sales are also up this year.

Still, Northern Ireland may not be out of the recessionary forest just yet as Richard Ramsey, Ulster Bank’s economist in the North, warned DUP supporters at the party’s annual conference in Comber at the weekend.

As he pointed out, there is no better illustration of what is really going on in the local economy than the current price of an Ulster fry – which has increased by about 42 per cent in the past six years.

Ann McGregor, chief executive of the Northern Ireland Chamber of
Commerce, said the attempted bomb attack yesterday on Belfast city centre is potentially devastating, and not just for Belfast retailers.

“Businesses operating in tourism need visitors; our large SME base needs large inward investors to supply and our exporters need to demonstrate security of supply. Incidents like these are damaging the image of Northern Ireland around the world,” she said.

But if Belfast needs a reason to be optimistic, it should look no further than two of its more ambitious sons – Gerry O’Reilly and Stephen Houston. Both local entrepreneurs have spent some time outside of Northern Ireland and returned to set up their own businesses in Belfast, and they have recently been singled out for the contribution they are making to the North’s economy.

O’Reilly set up itradein.com with his brother Adrian three years ago. The business has just been chosen to join an elite UK business group compiled by SVC2UK (Silicon Valley Comes to the UK) that bookmarks companies with the potential to reach £100 million in revenue in the next three to five years.

Belfast-based itradein.com is an online trading environment for the food and drinks industry. It operates along the lines of a Linkedin-style model enabling buyers and producers to create company and personal profiles and then directly connect to major industry players looking for suppliers.

Industry broker
O’Reilly’s business model is based on 20 years of experience in the food and drinks industry.

“We know our market place, we know how to match producers and suppliers with opportunities and what we want to create is a global company,” he said.

Itradein.com is currently in strategic talks with Aldi and is also in the process of raising a further £1 million in venture capital finance to expand its operations.

Houston, meanwhile, has made it his business to find companies such as itradein.com to invest in, which is why he has been named as Northern Ireland’s Halo Business Angel of the Year. Houston is a non-executive director of Sophia, the award- winning software company that aims to make online information more easily accessible for consumers, retailers and publishers.

According to Houston, what sets the Belfast company, which also has offices in San Jose and St Petersburg, apart from its rivals is its “contextual discovery engine” (CDE) that automatically understands meaning and context.

He is the lead investor for the Northern Ireland-based Volcano Syndicate, which was the first syndicate formed within Halo and is always looking for the next big thing.

Houston began his career at the age of nine in his family’s fashion retail business: today he is no longer a retailer but chairman of the investment company Houston Acquisitions. He firmly believes that Northern Ireland has the “X factor” when it comes to start-ups thanks in part to “two very good local universities” and “its people”.

“There is work to be done but the risk is worth it,” he says. It is a motto Northern Ireland might do well to adopt when it comes to the local economy.