Retail workers ‘need to be able to plan’ their hours, says Breege O’Donoghue 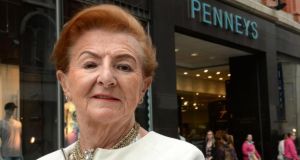 Primark executive director Breege O’Donoghue: ‘It is important that all members of staff are able to plan their hours.’ Photograph: Dara Mac Donaill

Breege O’Donoghue, executive director of Primark/Penneys and the chair of the Labour Relations Commission (LRC), has criticised low-hour employment contracts that create uncertainty for retail workers.

Ms O’Donoghue, who is due to receive an award in the InterContinental hotel as Alumna of the Year of UCD’s Quinn business school, said her rejection of such contracts for Primark is based upon “respect and dignity of the individual and accepting they need to be able to plan”.

Ms O’Donoghue said it is the policy of Primark, which employs more than 5,000 Irish staff, to disallow zero-hour contracts. “If someone wanted one, they couldn’t have it,” she said. “Our most important resource is our people. You want to attract and retain talent at all levels of the business,” said Ms Donoghue, who took responsibility Primark’s human resources for almost 35 years until 2014.

“It is important that all members of staff are able to plan their hours, plan their budgets and work accordingly. It’s a very important facet,” she added.

Penneys struck an agreement in December 2013 with Mandate, the retail workers union, to give employees bands of hours, guaranteeing them certain levels of work.

All of Primark’s staff also received a 3 per cent pay rise, while a lower rate for under-18 workers was also abolished under that agreement.

“While a 3 per cent pay increase is more than welcome, and will compensate Penneys workers for cost of living increases, security of earnings through banded hours is a huge step forward in Mandate’s campaign for decent work and a decent living wage in the retail sector,” the union said at the time.

Mandate is involved in an ongoing dispute with Dunnes Stores over low-hour contracts for many of its members there.

The crux of that dispute, which resulted in a one-day strike earlier this month, is that many of the unions members among Dunnes 10,000-strong workforce are on 15-hour contracts, although they routinely get more shifts.

Those staff are only guaranteed 15 hours, however, and Mandate has vowed to step up its action against Dunnes so that staff get better contracts.

10 Are you mad to keep your money in prize bonds?