Staff protest outside landmark Dublin retailer after loss of 460 jobs 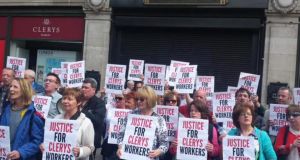 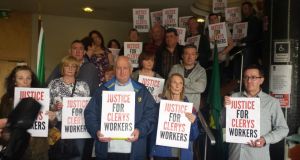 Clerys staff at Liberty Hall about to depart for a protest on Saturday afternoon outside the closed Clerys store on O’Connell Street in Dublin. Photograph: Kitty Holland/The Irish Times

Minister for Employment Ged Nash has called on the new owners of Clerys to “engage immediately” with the more than 400 workers who were abruptly laid off on Friday.

He has described the way in which they have been treated as “cold and callous” and said he planned to meet them and their trade unions, Siptu and Mandate, as soon as he could.

The landmark department store, on Dublin’s O’Connell Street, closed suddenly on Friday evening after 162 years trading, leaving 130 staff out of work and 330 workers employed by 50 concession outlets within the store with uncertain futures.

At about 5.30pm Clerys workers were called to a meeting in the centre of the store to be told the trading arm of the business had gone into liquidation.

They were told they would be entitled to statutory redundancy of two weeks’ pay per year of service and that they would be met individually by the liquidator, KPMG, in coming weeks.

Many staff were not working on Friday or had already finished their shifts and heard about the closure from friends or on social media.

There has been no engagement between the new owners or KPMG and Siptu - the union representing the majority of Clerys workers - since the closure.

Nor, according to Siptu organiser Robert Purfield, was the union given any prior indication that the business was to be sold.

“The workers here, some of who have given over 40 years of loyal service to Clerys, have been treated despicably,” he said. “This is as bad as Dunnes Stores’ treatment of its staff.”

Organiser Teresa Hannick said, “Ironically, a lot of Clerys workers were on the march last weekend in support of the Dunnes workers.”

Over 100 Siptu members attended an emergency meeting at Liberty hall this morning before marching to the store.

Carrying placards with the slogan “Justice for Clerys workers”, they chanted “The workers united, will never be defeated” and “What do we want? Justice. When do we want it? Now.”

Members of the public applauded them while motorists beeped their horns in support.

Among those protesting was Margaret O’Dea (61), who started working in Clerys when she was 17.

“It was always a lovely place to work, like a family. It was only in the past few years it went pear-shaped. I was working in the children’s section yesterday and at about 5.15pm they told us to close our tills and come to a meeting.

“I thought we were going to be told about the new owners, but they just said Clerys was closing and our jobs were gone.

“I started to cry. I was shocked. All my years there and, just gone, and ‘You’re getting nothing’. It’s just greed. There is money there.

“They just don’t want to give any of it to the workers. I am very sad that human beings could treat other human beings like this.”

A Siptu spokesman said: “We are exploring all channels, including possible political intervention, to require the liquidators to meet the union and negotiate a fair settlement for these workers. What is happening here is completely unacceptable.”

Mr Nash said:“In my opinion, Clerys staff have been treated in a cold and callous way.

“Many of them have spent their entire working lives at the iconic store and they deserve better than this from the new owners.

“The new owners should engage immediately with the staff and their representatives as to outline their plans for the business and this landmark site.”

Dublin City councillor Bríd Smith of People Before Profit said on Saturday she would put a motion before the council at its next meeting against the granting of any change-of-use planning permission to the new owners for the Clerys building, until they negotiate a fair redundancy deal for the workers.

Staff at Clerys held a protest outside the store in the early afternoon on Saturday over the abrupt closure and job losses.

The company operating Clerys, OCS Operations Ltd, s employs 130 people at the store and in its warehouse.

Another 330 are employed by the 50 concession holders who operate in the department store.

Staff were told by a liquidator their jobs were lost on Friday at about 5pm after the announcement the company was sold earlier that day.

About 12 staff staged a sit-in at the store in protest for a few hours on Friday.

Ms Hannick earlier said staff had been treated in an “unacceptable” manner by their employer.

“Workers were understandably devastated and angered by both the news that the company was closing and the disrespectful manner in which they were treated,” she said.

“This treatment of honest hard-working people marks a despicable new low in the annals of Irish business practice.”

Ms Hannick said workers only learned they had lost their jobs when a liquidator from KPMG arrived at the store about 5pm on Friday and told them the company was closing.

“Several of our members in Clerys have never worked anywhere else. Our shop steward has worked for the company for 43 years. He was told by the liquidator with only 30 minutes’ notice that he had to leave the place where he had worked for over four decades, before the doors were to be padlocked shut,” she said.

At about 2.30am on Friday, Clerys’ US owners Gordon Brothers sold the business to a joint venture called Natrium Ltd, comprising Irish investment group D2 Private and Cheyne Capital Management. The sale price was not disclosed.

Events in the High Court indicate this is a property play by the new owners, who declined to comment.

Sources last night suggested the store might be redeveloped to comprise retail on the ground floor and offices above.

Mr Justice Paul Gilligan was told the company operating Clerys must immediately cease trading and close down to prevent any further debts arising.

Between August 2012 and January 2015 the business lost €4.3 million, and relied on loans from its parent group.

The judge said he was satisfied to make the appointments as the firm was “balance sheet insolvent” and appeared to be in “severe financial difficulty”. This is pending the hearing next month of the petition to have it wound up.

OCS Operations Ltd and OCS Properties Ltd, which owns the store, are both owned by OCS Investment Holdings Ltd and form the OCS group of companies whose owner was Gordon Brothers.

Kelley Smith, counsel for OCS Operations, said the company had no alternative but the appointment of liquidators.

As staff made their way out of the store, many paused to comfort colleagues.

Sharon Maguire (45), from Baldoyle, Dublin, said she had worked at the store for more than 18 years as a hairdresser.

“We’re devastated. I’ve only booked my holidays yesterday and I’ve no job now . . . Our fobs were taken at the door.”

Sinn Féin TD Mary Lou McDonald said the rights and entitlements of these workers needed to be protected.

The landmark Dublin store had been closed for a lengthy period in 2013 after significant flood damage due to a summer storm.

It only reopened four months later in November of that year, when the Christmas rush was already well under way.

The O’Connell Street store originally opened in 1853, under a different name. It was taken over in 1941 by by Kerryman Denis Guiney and his family.

It had survived two world wars, a civil war and many recessions.

1 If tourists are such pariahs should we not be testing them on arrival?
2 ‘My rent here is so low it’s a joke’
3 WeWork on track for profits in 2021, says chairman
4 British pound sinking to ‘emerging market currency’ status
5 Belgium helps Ireland to a Brexit boon
6 Varadkar and Donohoe to meet banks to discuss mortgage breaks
7 Remote working: How to get ahead in a changed world
8 Irish Rail losses up slightly despite record passenger numbers
9 This charming man: how Paschal Donohoe won the Eurogroup presidency
10 The worst places in Ireland to invest in property
Real news has value SUBSCRIBE